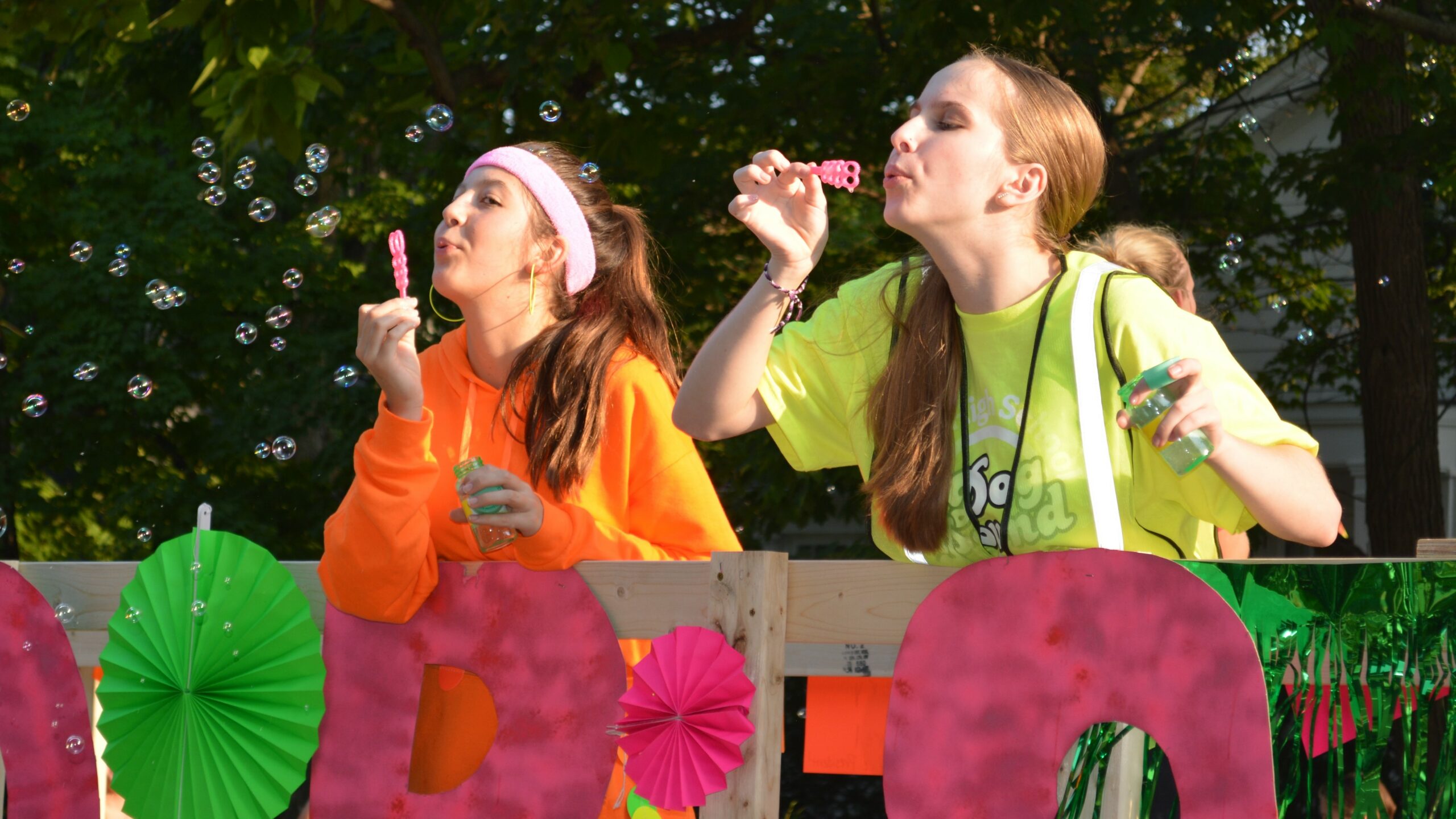 Batavia’s 2022 Homecoming celebrations kicked off with “Paint the Town,” a designated day where local shops and businesses had their storefronts decorated by the school’s clubs and sports. The entire Batavia downtown was covered in layers of colorful paint to signal the beginning of this year’s festivities.

One of Batavia’s annual homecoming traditions is an action-packed spirit week. On Monday, students wore clothes relating to their pre-designated class colors. The grade with the fewest participants were the orange-clad freshmen, reminding everybody that fall was just around the corner. Next up were the purple-adorned sophomores and the foresty green juniors, with considerably more participants than the freshmen. Finally, the grade with the most participants (by far, I might add), were the seniors, dressed in blue from head to toe. To end the first day of spirit week came the Class Olympics, in which the school’s senior volleyball team was usurped by the juniors. Although Monday’s festivities were over, the week was far from over.

For the second day of spirit week, Tuesday was pajama day! Many students came to school dressed in their favorite pajama bottoms, proving that plaid was (to many people’s surprise) making a comeback. Tuesday night was relatively calm, but was quickly followed by neon day on Wednesday, without a doubt the most out-going and crazy days of spirit week. Students from all four grade levels came to school adorned in bright colors, the most frequent being lime green and prison-jumpsuit-orange. Wednesday night, however, was the true star of the show.

Shortly after the school day ended, over 200 students, staff, coaches, and volunteers from the community gathered in the Wilson Street Parking Lot. A collection of vehicles, made up of everything from pickup trucks to police cars to gigantic-sized towing vehicles from local companies were splayed out, ready to be boarded by the horde of eager students. Bags of candy were passed out, ready to be tossed to spectators of the parade, although some pieces may have mysteriously vanished along the way. Once everybody was ready to go, they set off on the parade route, which was established in 2021 to minimize traffic in the city’s streets.

Starting at 5pm, the procession of trucks set out from the lot, led by a police car featuring our school’s very own Mrs. Gajos. Following the blaring blue-and-red lights came a couple of smaller pick-up trucks filled with representatives of the school’s clubs. In the spotlight were Best Buddies, Video Club, Key Club, Black Student Union, and Batavia’s very own improv troupe; “But Seriously Folks.”

Now, the next part of the parade was the scene of one of the most competitive traditions in BHS history, and no, I don’t mean the mad dash to the lunch line. Following the club vehicles came the Batavia Student Council, split into four factions based on grade level. While the freshmen made an effort, and the seniors stuck to the glow-in-the-dark theme, it was the general consensus that the juniors had the best float. The reasoning for this? Simple: they had bubbles.

After the four stuco floats came the core of the parade, and the part that most spectators came to see: the athletics section (this is Batavia, after all). Almost all of the fall sports teams were represented, with flags, giant props, and fun signs. The dance and cheer teams led the way, with all sorts of fun dances and celebrations to set the mood and get the audience excited. Girls’ swimming featured the most creative sign there, harboring the message “No Pool, No Problem.” Batavia’s girl wrestlers also had awesome signs, and showed everybody how excited they are to possibly have a state champion two years in a row.

The back half of the athletics section had a lot more of the boys sports. Golf had an extremely large golf ball at the front of one of the cars, making several passerby laugh at the sight of it. Don’t be worried though, the golf team was serious as ever, and kept their composure despite the looming presence in front of them. Behind the golfers were the boy’s soccer teams, who also had a giant prop, this time in the form of a soccer goal. Mounted on the back of a flat-bed truck, this was a sign that the trucks would only get bigger from here. Next came the cross country team, who appeared to have a much smaller group, but only because many of their runners traversed the parade route at top speeds to carry flags bearing the Batavia bulldog!

Concluding the parade was Batavia’s biggest and most famous sport, football. Filling the backs of four gigantically-sized flat bed trucks, it was truly a sight to behold. The teams were presented in order from youngest to oldest, with the players tossing candy to onlookers, football style. Despite having massive trucks, the Batavia football teams were so large that many of the players had to walk along the route, but they took it like champions (no pun intended), and gave high-fives to spectators as they passed. While this year’s parade was over, the audience was pumped to come back again!

Thursday’s are always a bit shorter at Batavia, since it is late start day for students, but spirit week went on, with today’s theme being centered around wearing homecoming shirts. This year the shirts were notably less popular than previous year’s, so not many students participated. Overall, this was the quietest day for homecoming, but perhaps the school was just getting ready for the most exciting day of the week…

Friday was Bulldog Spirit Day, with students wearing different colors for their grade levels, this time centered around the four core Batavia colors: gold, white, red, and black (split between the grade levels). Following a brilliant morning “march around the school” by the drumline, the day’s schedule was very strange, but it was all to accomodate for the homecoming assembly that afternoon. As the students were packed into the bleachers, the gym appeared to be split equally between the four colors, producing a visual effect that was very pleasing to the eyes.

The assembly began with a true show of cooperation and teamwork, with the school’s dance teams working together with various staff members for a fun-filled performance. I will admit, seeing math teachers being lifted into the air was not something I was expecting, but I could confidently say that I enjoyed it. However, it wouldn’t be a true Batavia homecoming celebration without some competition, which is exactly what came next. A team of seniors were to face off against a team of staff members in a game of tug of war. Now, I wish I could give a more detailed description of how the game went, but I am afraid it was over in the blink of an eye, with the staff pulling the seniors right across the middle line.

With the students riled up and perhaps wanting slight revenge for that humiliating defeat, it was time for the classic staff vs. students volleyball game. The junior team did indeed win the Monday night game at the class olympics, so they replaced the usual seniors. Despite being made up of some of the best men’s volleyball players the school has seen in years, the staff team was just too good. In the junior’s defense, the staff had both a Mr. Tim Kauffman and a Mr. Joseph Tickle, both of whom are very adept players at the game. Following yet another defeat, the students were done with competition, and had their spirits slightly dampened.

However, what came next got everybody excited: the Batavia drumline! Many people do not understand just how much skill comes with playing the drums, but after how easy the drummers made it look on Friday, it is a bit hard to blame them. On top of playing drums at the speed of light, there were flips, break dances, upside down drumming, and even a “drum duel” where the line split into two groups and competed to see which could be more impressive. No matter who you thought won, it is without question that it was a close call.

On the other hand, there was no question who won at Batavia’s Friday Night football game. Lake Park may have thought they stood a chance, but experienced a classic Batavia-style defeat. To be more formal, they lost by 42 points and scored none against the Bulldogs defense. To end the fun-filled week, the homecoming dance took place on the same football field on Saturday night. There was something to enjoy for everyone at Batavia’s 2022 homecoming, so make sure to come next year – Spectator will be sure to cover it, so make sure you keep tuning in when you have a chance as well!