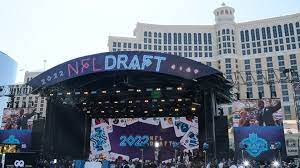 This is what the Bears need to do with their two second-round picks in this year’s draft.

Last season the Chicago Bears finished third in the NFC North at 6-11. The Bears had the 24th-ranked offense in terms of yards per game. On average the Bears had 307.4 scrimmage yards per game, which were almost 100 yards less than the top offense in the NFL. It was a tough rookie season for quarterback Justin Fields. In 12 games, he only threw seven touchdowns but threw 10 Interceptions. This isn’t only his fault though. The Bears had the 22nd ranked wide receiver corps in 2021 and the Bears had the 27th ranked offensive line. So it is hard to produce with such little help. This is why the Bears really need to maximize the amount of talent they can get in this year’s draft.

The Bears hold two picks in the second round of the NFL draft this year at spots 39 and 48. With these picks, the Bears should be targeting a wide receiver and an offensive lineman that can help build toward their future. A cornerback would also be a helpful selection, though. In this year’s draft, there is a wide array of talent at the wide receiver position with pass-catchers such as Jameson Williams, Garret Wilson, and Drake London. This trend continues at the offensive line position with stars such as Evan Neal and Charles Cross. Most likely these high-profile players will not fall to the Bear’s selections in the second round, so these are the players the Bears should be targeting in the second round.

The Bears should try to get a wide receiver at the 39 spot. Two players they should be looking at are George Pickens and Jahan Dotson. Pickens is a junior from the University of Georgia who is 6-feet, 3-inches, and 195 pounds. . He was limited this season due to injury and only played four games. In the 2020-2021 season, he caught 29 passes for 378 yards and five touchdowns. He is a big, physical receiver who would pair well with the smaller Darnell Mooney. According to CBS Sports, he can be compared to Kennan Allen, an all-star wide receiver from the Los Angeles Chargers. Next is Dotson, who is a 5-foot, 11-inch, 178-pound senior from Penn State University. Dotson was the leading receiver for the Nittany Lions in 2021-2022 as he caught 91 passes for 1182 yards and 12 touchdowns. He has a smaller frame than Pickens at only 5 feet 11 inches but he is quite similar in size to Mooney who has a great connection with Fields. According to CBS Sports, Dotson can be compared to Diontae Johnson, a speedy wide receiver from the Pittsburgh Steelers.

With the 48th pick, the Bears should help the offensive line. Two players they should be targeting are Kenyon Green and Zion Johnson. Green is a 6-foot, 3-inch, 323-pound junior from the University of Texas A&M. Green excelled at offensive tackle in college but he will probably fare better at guard in the NFL. He is a strong pass protector who consistently holds his blocks, but when he gets beat he tends to be grabbed, especially when trying to stop a strong edge rusher. According to CBS Sports, he can be compared to Dalton Risner, an offensive guard for the Denver Broncos. Next is Johnson, a senior, who is 6-feet, 3-inches, and 312 pounds from Boston College. Johnson, who had mostly played guard for the Eagles, was strong in the run game and showed the ability to move people in. He isn’t the best athlete, though, especially when blocking on the move. According to CBS Sports, he can be compared to star center Rodney Hudson from the Arizona Cardinals.