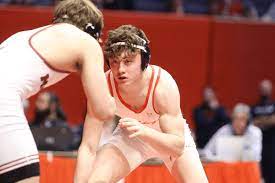 Kaden Fetterolf, a junior that wrestles in the 138-pound weight class from Batavia High School and has already made some of the most notable achievements in the school’s history, will be looking to secure his first state title and become the schools first ever IHSA state place winner. Fetterolf has been involved in the Batavia wrestling program for 11 years, leading to part of his success.

This past season, the Bulldogs were ranked fairly high in the class 3A state rankings, peaking at No. 15 in the state. A big contributor to the success, Fetterolf finished with a season record of 41-6 with 17 wins by fall. Fetterolf shaped up well in conference, sectionals, and regionals, all of which he placed first in, which advanced him to the state series for his second year in a row. The junior pummeled his way through the bracket where he met the No. 2 ranked wrestler in the state for his weight class in the semi-finals. Fetterolf ended the wrestler’s season with a last-minute takedown to advance him to the championship match. Ultimately, the junior wasn’t able to outlast Moline wrestler Kole Brower with a 13-3 (MD) loss.

Kaden stated that his training is a major part of his success “I work with some of the best wrestlers in the state. They push me to go harder and it shows on the mat.” Kaden trains throughout the year, even when the main seasons aren’t in yet.

Jackson Tonkovich, fellow teammate and senior captain last season, has seen the junior get better and better as years went by.

“He’s not the same wrestler as he was freshman year,” Tonkovich said. “He has that knowledge now. That can’t be beaten.”

Other teammates also see Kaden’s success and potential and strive to use it as motivation.

Cael Andrews is another state qualifying wrestler and a junior like Kaden.

“When we wrestle during practice, and we go live, it’s the last man standing,” Andrews said. “You don’t want to be the one who falls.”

The wrestling room is a competition that helps the wrestlers improve. “Everytime we leave that room, we know we’ve gotten better or improved a skill.”

David Andrews, who is the schools athletic director, believes in the potential of Fetterolf. Next season Batavia hopes to continue on the path they’ve been on, which is overall winning.

“There’s a good chance Batavia sees its second ever state champion next year.”