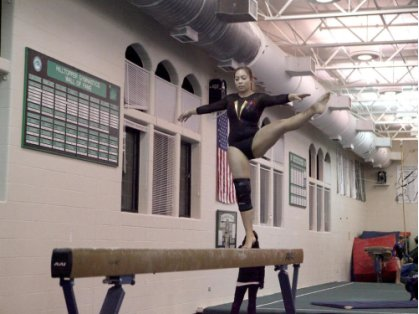 On Wed., Feb. 3, Batavia High School’s varsity gymnastics team placed third at the Glenbard West regional and took home two individual awards. Megan McGee, senior and one of five team captains, placed third on vault, receiving a 9.25. The other individual award went to Lauren Stangl, who is a senior as well and another one of the five team captains. She placed fifth on beam, receiving an 8.875.

“I am happy with how I did,” Stangl said. “I love that all of the girls cheered for each other the whole time, and the overall attitude of the meet was one of my favorites this year.”

These were the only two gymnasts to place in the top five at regionals, automatically giving them the chance to compete at IHSA Sectionals. Sectionals will again be held at Glenbard West High School on Thurs., Feb. 11.

“My goal for sectionals is to hit both of my routines,” Stangl said. “On bars, I would like to keep clean shapes and stick my dismount. And on beam, I want my this routine to be my best. This next week at practice, I plan on making the routine more consistent so I feel confident going into sectionals. Finally, I want to be a good teammate and have fun cheering everyone on.”

The girls attended first, second and third block, as well as lunch. The BHS Gymnastics Coach, Taryn Boyce, gave the girls an option to leave school after third block, missing fourth block or they had the option to go to a full day of school and ride the bus with the rest of the team at 2:30. As a whole, a majority of the girls on the team chose to miss fourth block. During this time, the girls rode to the coach’s house and had a healthy snack before the big meet. They went head to head against Glenbard West, Glenbard South, and Wheaton Co-op.

Once the bus arrived at Glenbard West High School, the girls soon realized they had arrived quite early which gave them extra time to prepare themselves for the competition.

“I am a little nervous about competing because it could potentially be my last meet,” McGee said before the meet. “But I want to remain as positive about it as I can so that I can perform the best I can.”

The gymnasts began competing around 6-6:30 and finished close to 9 o’clock that night.