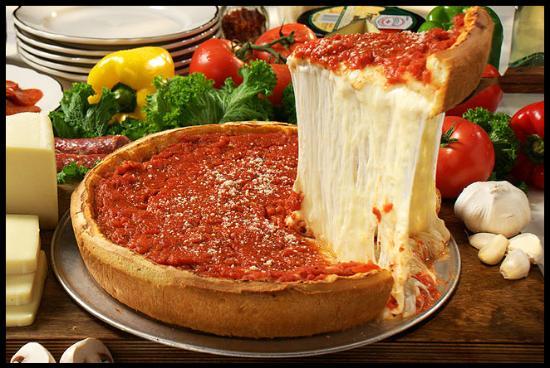 Freddy’s pizza is the best of the best, and at the top of the list for a reason. Located in Cicero, a suburb of Chicago, this pizzeria is the ultimate place to grab a slice and have a delicious meal. Their options include cheese, sausage, pepperoni, veggie, and the favorite, Margherita. The cheese melts in every person’s mouth and the sauce has all of the right spices blended together. Everything about any type of their pizza is just made perfectly.

Want a delicious deep dish pizza? Get it at Lou Malnati’s. This pizza place has various locations in the Chicagoland area, and for good reason. Their rich and tasty red sauce adds so much flavor to the pizza. The deep dish dough is just the right amount of crumbly and crispy. The thin crust is just as delicious. Its crunchy texture makes the cheese and sauce and whatever topping desired all blend with each other creating the perfect balance. Passing up a very enjoyable meal at this place would mean that a tasty lunch or dinner would be missed.

Gino’s East, found in various locations across the Chicagoland, is also known for their deep dish, and they do not disappoint. The juicy tomatoes and flavorful cheese make Gino’s East pizza one of the best! The use of spices and herbs, like oregano and basil, are just the right ingredients for these pizzas. The amazing tastes here is what makes this pizza place on the top five list!

In the mood for a classic but yummy pizza? Find it at Chicago Pizza in Batavia, Ill. This pizza may be regular, old thin crust, but there is so much to choose from. Their flavors including ranch, Hawaiian, Mexican, BBQ chicken, and even white pizza. Their plain cheese is as good as the rest. The melty cheese leaves everyone begging for another slice into their stomachs!

Spot five on the list is Cici’s Pizza. Placed in numerous locations including Naperville and Plainfield, Cici’s Pizza is a crowd pleaser. Mac and cheese is a favorite, along with ham and pineapple, buffalo chicken, veggie, and many more. They also have flatbread pizzas with amazing flavors such as chicken bacon club, spinach alfredo, and honey BBQ chicken. The ingredients and combinations on the pizzas are what really sells it, and that is why it made the top five list for Chicagoland pizzas.