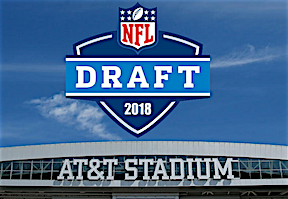 With four teams remaining in the hunt for the Lombardi trophy, most teams in the NFL have already turned their focus towards the off-season. Perhaps the biggest moment this off-season for many teams is the 2018 NFL Draft, being held this year at AT&T Stadium in Arlington, Texas. While the Patriots, Jaguars, Vikings, and Eagles prepare for the conference championship games this weekend, college teams have finished their bowl games and Nick Saban has tied Paul W. “Bear” Bryant for the most national championship wins of all time with 6.

Now, the seniors and underclassmen of these teams are preparing for the next step in their football careers: the NFL. These athletes will spend the next month and a half preparing for the NFL Combine, where NFL teams will get a glimpse at the future stars in the making. While it is still too early to know for sure which teams will draft who or where which player will fall, these are my top 10 prospects for the 2018 NFL Draft.

This will be the biggest debate of the draft this year. Darnold v.s. Rosen. Much like the 2015 debate between quarterbacks Marcus Mariota and Jameis Winston, no analyst or fan can know for sure which one of these quarterbacks will go first. Rosen tops my list mainly because of experience. Rosen has three seasons of starting experience under his belt, and despite only playing 6 games in 2016, Rosen came just shy of 2,000 yards passing. With 9,341  career passing yards and 59 touchdowns, Rosen has potential to blossom into a quality NFL starter in his first season as a pro.

Like Rosen, Darnold has a rare talent that causes NFL scouts to stare in awe. The sophomore totaled 7229 yards and 57 touchdowns in two seasons at USC, to only 22 interceptions. A cause for concern which drops him below Rosen on this list, is his lackluster performance in the Cotton Bowl, in which the Trojans were blown out by Ohio State 24-7. Darnold threw for 356 yards and no touchdowns, with one interception which was returned for a touchdown. Not to mention, Darnold was sacked 8 times. Bottom line, there is a cause for concern about Darnold’s performance in big games. Despite this, teams in the hunt for a quarterback won’t shy away from the 6’4 sophomore boasting a big arm and the ability to place the ball in the tightest windows.

The first defensive player on my list, the defensive end from NC State is a freak of nature. With back to back 10 sack seasons, bringing his career total to 25, Chubb displays a freakish ability to get after opposing quarterbacks. The end also finishes his college career with 198 total tackles, including 54.5 tackles for loss. Demonstrating explosiveness and great feet, Chubb would fill a hole at defensive end for a team like Tampa Bay who lacks a pass rushing defensive end.

Possibly the best offensive player in the draft, Saquon Barkley is the missing piece needed to kickstart any stumbling offense. The Penn State running back has amassed 3,843 rushing yards and 1,195 receiving yards in three years with the Nittany Lions, scoring a combined 51 touchdowns. The consensus Top-5 pick has demonstrated a hard-nosed running style with great vision and agility. Put him behind a proven veteran offensive line, Barkley will rival Le’Veon Bell for the title of the best dual-threat running back in the NFL

After terrorizing the SEC for three seasons, the defensive back is ready to torment offensive coordinators and wide receivers alike in the pros. Fitzpatrick collected 171 total tackles, 16.5 tackles for loss, 5 sacks, and 9 interceptions, en route to helping the Crimson Tide to three straight CFP National Championships and two victories. The scary thing about him is that he can thrive at any position. The 6’1, 203-pound corner has also played safety and hybrid linebacker in his college career. His versatility and crushing hits are enough to make any team seriously consider selecting him if he is still on the board when their pick rolls around.

The Georgia linebacker failed to win the National Championship game, but he is still college football’s top linebacker. In three years at Georgia, Smith was a tackling machine, totaling 146 solo tackles including 85 in his senior season. Displaying a freakish ability to track down the football and make the tackle, Smith should draw plenty of interest from teams looking to fill a crucial hole at inside linebacker, such as the Raiders or the Dolphins.

The reigning Heisman Trophy winner put together a fabulous college career that will draw interest from several teams looking to solve their quarterback problem. In four college seasons including three at Oklahoma and one at Texas Tech, Mayfield threw for 14,607 yards and 131 touchdowns. Mayfield displays a great ability to leave the pocket and run the ball as well, totaling over 1,000 yards with his legs in four years.  Whichever team drafts Mayfield will also get a fiery leader, playing with a chip on his shoulder.

Although many dub Alabama’s Calvin Ridley as the nation’s top receiver, I feel like Sutton offers much more potential to become a legitimate No.1 receiver in the NFL. Sutton towers over cornerbacks, standing at 6’4 and weighing in at 215 pounds, providing any quarterback with a big bodied receiver who demonstrates the ability to be able to win toss-up battles. Teams could also utilize his big frame as a red zone safety blanket. After posting back to back 1,000-yard seasons at SMU, Sutton is ready to follow in the footsteps of Corey Davis, another small school wideout(Western Michigan), who was drafted 5th overall by Tennessee in the 2017 NFL Draft.

McGlinchey is the nation’s best offensive lineman, there is no doubt about that. The 6’7, 271-pound offensive tackle has played in 51 games in four seasons at Notre Dame, starting every single game in his last three years. He was named first-team All-American as a senior and served as a captain for the Fighting Irish. Whatever team selects McGlinchey will be receiving an anchor for their offensive line for years to come.

The second Sooner to make this list, Orlando Brown is the second best tackle in this draft class, only after McGlinchey. His father Orlando “Zeus” Brown Sr. played 129 games in the NFL for the Browns and Ravens. Taking after his father, Brown towers over opponents, standing at 6’8, weighing 345 pounds. Brown was named Big-12 Offensive Lineman of the Year for the second straight year as a senior and he started all 13 games for the Sooners. Like McGlinchey, Brown will provide any team in the market for an offensive lineman a solid starter, who will make an immediate impact.