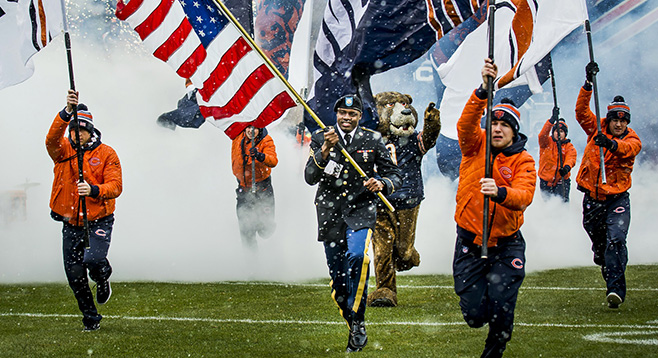 After a miserable Bears’ seasons going on and on since what seems forever, it is time for the Bears to make a change. With new coach Matt Nagy leading this team mixed of young stars and aging veterans, the front office needs to help Nagy lead them to the playoffs. The Bears have recently been a mediocre team, over the last four seasons the Bears have averaged less than five wins per season. With the last season ending with a 5-11 record, only marginally better than the season before that with 3-13. The Bears need to bring some fresh faces to both sides of the ball. The Bears currently have 40 million dollars to spend in free agency and these are the players who General Manager Ryan Pace needs to bring in this offseason.

The Bears are needing a large amount of help on the defensive line and Clayborn is the perfect piece for the puzzle in the defensive line. He is in the middle of his career at age 29 and had nine and a half sacks this season. The best part about Clayborn is the contract salary for his last season with the Falcons was 4.25 million dollars but is believed to be worth 9.3 million dollars. With his high amount of sacks and low contract for what he has done Clayborn will definitely need to be a Bears target.

Butler is an overlooked player on the Patriots’ defense behind Stephon Gilmore and Patrick Chung. Also, Butler has won two Super Bowls and played in his third this season. Butler had 55 total tackles, one sack, along with two interceptions. Butler has been there when the Patriots really need him to stand out and was the one who propelled them to a win with his last-second interception against the Seahawks in Super Bowl XLIX. Butler’s contract salary last season was 3.91 million dollars. If the Bears do not bring back Prince Amukamara, Malcolm Butler is a good fit. Butler also had some trouble during Super Bowl 52, so the Bears could most likely get Butler, who is a top ten cornerback, for cheap, unless Matt Patricia, the new Lions head coach, snatches him up first.

With the amount of linebackers the Bears have on their current roster, they seem to be set for next season. With names like Lamarr Houston, Pernell McPhee, Danny Trevathan, and Willie Young, it seems like it would be hard for the Bears to be bad there, but they screw that up too. Posluszny is coming off one of his worst season yet. When looking at his stats, when he has a bad season he usually rebounds and has an outstanding season the next year. Last season Posluszny had 43 tackles, 18 assisted tackles and one and a half sacks. Posluszny went to the Pro Bowl in 2013 and has yet to return. Besides that, he is one of the better defensive players on a  Jaguars team with one of the league’s best defenses this season and would be a huge contribution to this mediocre Bears’ defense. Posluszny was making five million dollars last year and that is a reasonable price to pay for a player of his caliber.

Calvin Ridley was a top receiver for the Crimson Tide this season helping them to a 13-1 regular season record and a national championship win. Ridley had a total of 63 catches for 976 yards, five touchdowns, and two rushing attempts for 17 yards. Ridley, who is just coming out of college as a young wide receiver coming into the NFL at age 23, would pair well with the Bears second-year quarterback Mitch Trubisky. As a young receiver, Ridley has time to come into the Bears system and improve. After losing Alshon Jeffery in free agency, the Bears have a large hole to fill in their system and Ridley could be the start to helping the Bears.

With the hole in the receiver core the Bears had this season, they will need to bring in more than one wide receiver. Sammy Watkins is only 24 years old, but has already proven to be a good player for the Bills and Rams. This season for the Rams, Watkins had 39 receptions for 593 yards, eight touchdowns, and no fumbles. Watkins would be a perfect player to replace lackluster Kevin White after his contract ends next year, who had only played one game last season with two receptions for six yards. Watkins could be a helpful piece to this Bears team, but is definitely not a long-term player. Watkins was making 4.91 million dollars.

Tolbert was putting up incredible stats this season as a fullback for the Buffalo Bills, especially given his position. Tolbert had 66 carries for 247  yards, and no touchdowns. For a running back, those stats aren’t great, but for a full back they’re on the higher side. Tolbert’s salary for last season was less than one million, but on the wrong side of 30, Tolbert will be a help to the Bears offense for his price.

Hurst, a defensive tackle for Michigan last year, had 56 tackles with 12.5 for loss of yards, along with a forced fumble, a pass break up, and five sacks. Hurst’s stats just scream potential and with a prediction that he could fall anywhere between the first and third round, Hurst may be perfect for the Bears and may fall right into their hands in the draft.

Logan was one of the compelling reasons that the Chiefs defense was a huge contribution to the offense, helping them make the playoffs. Logan was drafted by the Eagles in 2013 and played for them up until last season when he signed a one-year, eight-million dollar deal. He was definitely worth the money. Logan played 15 games and 51 tackles and two sacks. Logan was a powerhouse on the defensive line last season and was one of the reasons the Chiefs always kept their opponents to 25.9 points per game the sixth lowest in the NFL.

Jackson was the highest rated cornerback in this year’s draft class. Highly regarded for his tremendous play at Iowa, Jackson had eight interceptions, 18 pass break-ups, with 48 tackles. Jackson will come off draft board early and may fall into the Bears hands. Jackson, who is a young, athletic, muscular player, could have a bright future in the back of the Bears’ defense.

Falk is another young, athletic, and well-built player at six-feet, six-inches, weighing 211 pounds. Even though the Bears did draft Trubisky in last year’s draft, it does not hurt to have a backup plan. Trubisky had the second lowest passer rating in the league last season and led the Bears to a 5-11 record. In recent years we’ve seen many robust quarterbacks come from late in the draft like Dak Prescott, Case Keenum, Russell Wilson, and Tom Brady. Now, from what most of the scouts said, Falk has potential and is a great pocket passer. He threw for 3,593 yards, 30 touchdowns and 13 interceptions, along with a 67 percent completion rating. That was a drop from what he had thrown the year before, too! The season before that, Falk threw for 4,468 yards, along with 38 touchdowns and 11 interceptions, with a 70 percent completion rating. Falk seems to put up solid stats and could maybe even top Trubisky for a starting spot one day.