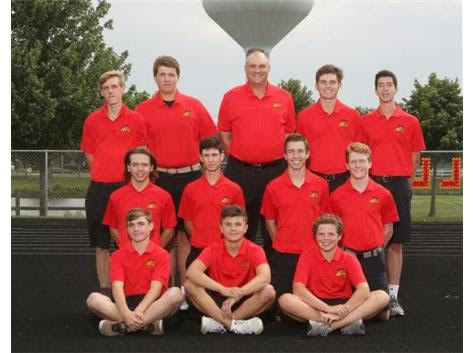 The Batavia men’s Bulldog golf team has yet another season under its belt, but this one was different. The 2018 season was the inaugural year of newly formed DuKane Conference. DuKane featured three familiar foes in St.Charles East and North as well as powerhouse Geneva, the eventual conference champs. The new schools were Wheaton North, Wheaton-Warrenville South, Glenbard North, and Lake Park. The new conference proved to be a tough test for the team as their fifth-place finish at conference shows.

The Bulldogs lost key contributors from last season. Justin Schutt, the team’s #1 golfer in 2017 and third place finisher at regionals. No. 3 and No. 4 golfers Keegan Thompson and Jack Bohr also left for college. All three were on the 2017 State Playoff team, so it was important that others stepped up this season.

Senior Will Huber took on his role as the Bulldog’s new No. 1 and earned All-Conference honors. In the Bulldogs win over St. Charles East and Wheaton-Warrenville South, he fired a season-low 1-under par 35 at Prairie Landing, his home course. Huber also logged a top 10 at the Geneva Invite with a 5-over-par 76.

“[Huber] is expected to be a leader of the team,” said Head Coach Tim Debruycker. “He did that well this year. We lose our No. 1 scorer and that means the juniors will need to improve in the offseason.”

No. 2 golfer, junior Ari Fragen,  also helped in the win over STCE and WWS with a season-low 1 over 37 and earned All-Conference honors. Both Huber and Fragen were two of the three returning members of last year’s playoff team along with senior Griffin Unterberg.

New faces Ryan Ingold and Jake Kleist, both juniors, played great in their first season on Varsity, as there high team ranking shows. Ingold concluded his 2017 frosh-soph season with a playoff win at the St. Charles North Invite, so the team knew what they were getting in him.

Like Ingold, Jake Kleist also had a successful season last year but improved a ton in 2018.

“He moved from the middle of the [Fresh/Soph] team rankings up to No. 3 on Varsity for most of the Year,” Debruycker said about Kleist’s improvement.

The Bulldogs went 3-4 in Conference play, defeating Glenbard North, St. Charles East, and Wheaton-Warrenville South. They struggled at the Conference tournament at the end of the year finishing fifth. However, the team did take home some hardware. At the West Chicago Invite, the Bulldogs shot a combined score of 337 en route to a first-place finish out of 12 schools.

What do the Bulldogs have to look forward to next season? Debruycker says new faces and an even better team.

“Bringing back three of our top four golfers and the No. 1 [Fresh/Soph] golfer who had great success and should lead us to be even better,” Debruycker said.