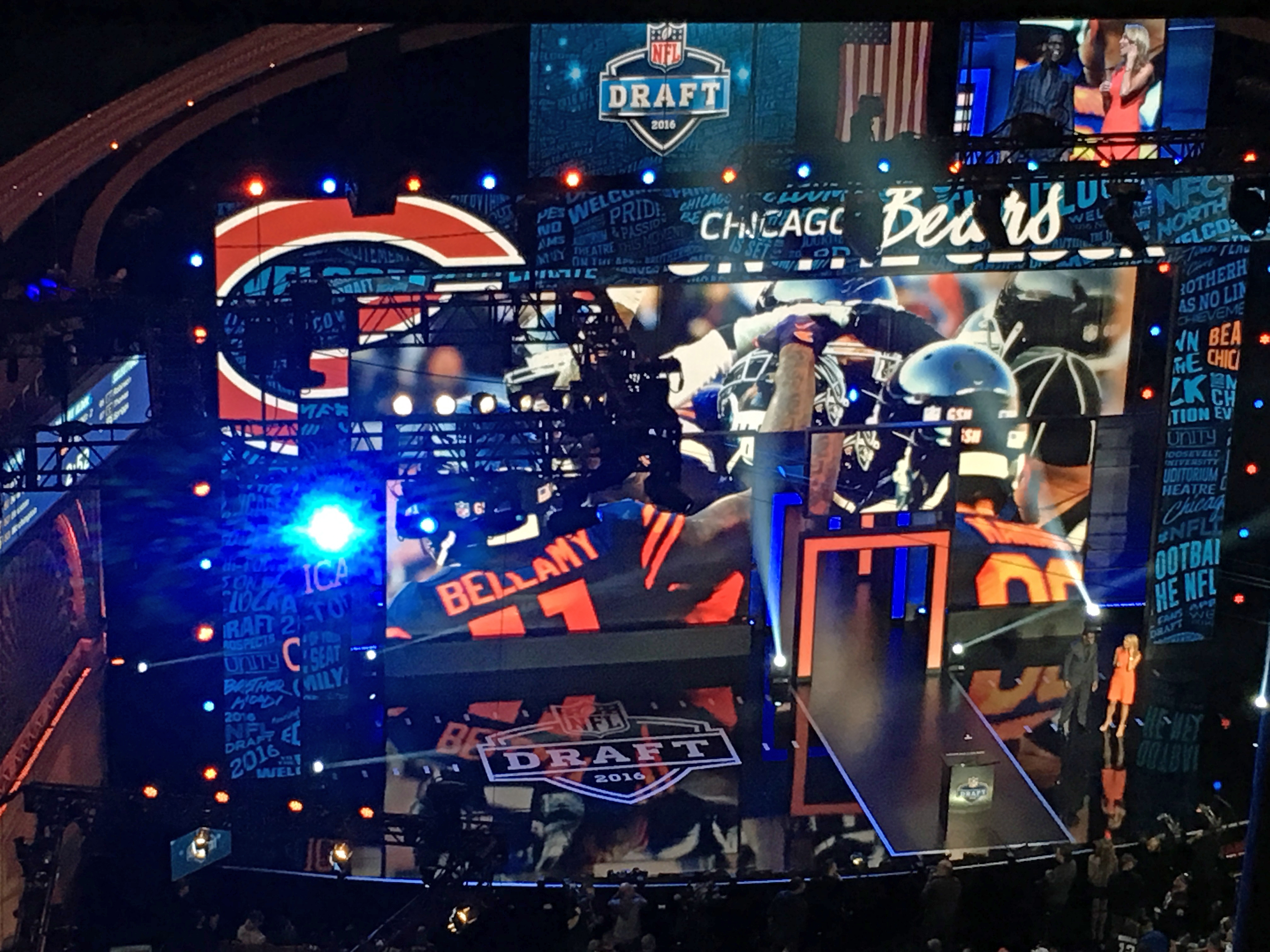 The Bears don’t have many draft picks in this year’s draft, as they lost many of their picks in trading for Khalil Mack and Nick Foles. With no first-round pick, the Bears must rely on two second-round picks. Many players on day two can become starters and make an immediate impact from the start.

Let’s look at who the best players the Bears should draft with the number 43 pick and the number 50 pick.

With the retirement of Kyle Long, the Bears need to find a solution at right guard.  Ruiz could be a great addition if he falls to pick 43. While he is very athletic, he can also work with a variety of schemes using his skills. Ruiz’s quickness and hands help him win right away. He takes advantage of these early wins by consistently securing his blocks. Even though he struggles with power rushers and lacks width, the tape shows he has the potential to be a starter. With Ruiz’s flexibility at guard and center, he is projected to be a late first or early second pick.

The Bears have shown a lot of interest in Josh Jones as they have met with him twice. While Jones has improved a lot over his college years, he still has a lot of raw talent that still needs to be developed. He has also shown to be more run-oriented. Most of what he struggles with, specifically footwork and setting pass blocks, can be coached. He can be a future starter with time to develop as he has shown to have the traits of a starting tackle.

The Bears will need to draft a safety at some point and Antoine Winfield Jr. has become more popular as the draft draws closer. Winfield isn’t that big as far as size goes, but his compact frame combined with his strength means he can play both safety positions. He is excellent at covering the tight end and hitting the running back. He is very smart and can read the plays, but can’t challenge the receiver for the ball. He struggles most when he is in the open field trying to make the tackles, as he does not have that wide of a range. While Winfield isn’t a star player, the Bears have met with him already and he can be a key piece to the defense.

Chinn is another player the Bears have met with. His athleticism, size, and speed, makes him a solid option at safety. He is great at making tackles, but he struggles when he needs to multitask. Chinn is at his best when he is in the action like during man coverage. One of his most valuable traits is his ball skills, but he lacks awareness. He could play linebacker or a nickel corner in the future.

Grant Delpit has been dropping in many mock drafts recently. While he suffered a high ankle sprain in 2019, his 2018 tape shows he plays aggressively. He has solid coverage skills and gets physical with tight ends. He is not afraid to rush in, but he is inconsistent when it comes to his technique when tackling. While he was not really a leader at LSU, he could easily find a starting job in Chicago.

The Bears should look to draft a cornerback to start right away. Johnson’s skills come from locking down top receivers by limiting their exposure to the ball. His athleticism and size was built for pressing the receiver and making their job harder. Playing this tight leads to some balance issues, but he is quick enough to immediately recover. Johnson can play the deep ball as well, but hasn’t perfected it yet. With his ability to pay press and off-man, the Bears should hope he falls to pick 43.

Terrell has good size and speed compared to the cornerbacks that are projected to go before him. He is very skilled at the start with his backpedal to his release/jab, and his aggressively riding on the receiver. Terrell is overall extremely athletic but lacks balance, especially with sudden stops. While he can attack the 50/50 ball, he lacks the ball-hawking skills to make the interception. He could still make a strong push for the starting job for the Bear.

Arnette has shown he can play on the outside and in at slot, but has played his best on the outside. He has the size and strength to be a solid NFL corner. He has shown to be more of a zone corner, as well, as he struggles to stick with his receiver when it’s man-on-man. When he is in zone coverage, though, he can do it all, from having awareness in space to providing run support. It all depends on the scheme fit for Arnette to be able to judge his success.

With Taylor Gabriel gone, the Bears are in need of a speedy receiver. Reagor has incredible speed and is a playmaker. It is better to get the ball in his hands quickly and let him make moves, rather than having him make jump balls. He is a player that can add a little more excitement to the Bears’ offense.

Brandon Aiyuk would be an appealing prospect if available at pick 43. He has the hands, size, and speed to improve his rank on most teams’ draft boards. He can run routes very quickly but is shown to be less effective when he is thrown off the route. He also struggles to compete for contested balls when he has to get physical. He still has a lot to work on, but Nagy could use someone like Aiyuk for his yards-after-catch ability.

The Draft is coming quickly and we will find out soon enough who the Bears will pick. With limited picks, Ryan Pace has to be careful in who he chooses, as Bears fans are ready to win now.