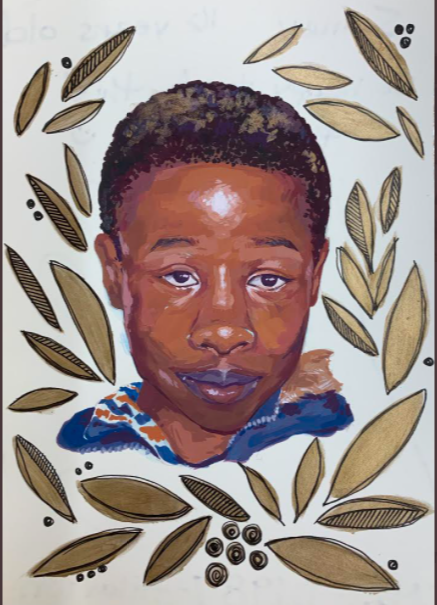 2020 and 2021 have been full of paint spills, blurry brush strokes, and gloomy colors but many have come out on top as artists of the week.

Sydney Short has showcased her artwork and holds the title of the last artist of the week for the school year of 2020-21.

“I’ve been making art ever since I was a toddler,” she said.

She specializes in gouache and acrylic art.

Gouache art is a form of water media meaning it consists of pigment and water, similar to watercolor. Some would even describe it as the “fancier” version of watercolor.

She has been creating art since she was just a toddler and has continued classes for about 12 years. She’s even attended a college course at SAIC in Chicago.

“I wouldn’t have done without them(SAIC college course),” Short claimed.

Playing with dolls and throwing cars around was what most toddlers did, but Short was different. At the age of six, she began taking art lessons from Mrs. Peggy Boehm. Originally, the age requirement was seven but they simply couldn’t pass out on how talented she was at such a young age. This was certainly a great opportunity for her.

“She had been one of my most talented students in my 35 years of teaching…” Boehm said.

Boehm also explained how Short was always willing to restart projects and attempt new methods and techniques in order to get everything just right.

Cleary talent runs through the family as Shorts’ mother also took lessons from Boehm when she was her age, as well. Both her mom and dad went to art school, Short said, “so I think it was growing up around their art and having them really push me to try it out.”

Both Zalkus and Boehm described her artistic personality as “emotionally connected and concerned” and “detailed, meticulous.” Over time she’s clearly improved and Boehm claimed Short has become “bolder and more confident”. Similarly, Zalkus explained, “I have watched Sydney gain precision and complexity in her compositions and use of media this year as well as she has grown in  added layers and sophistication to her concept.”

When asked, What do you believe may be one of her favorite accomplishments, Boehm said she believes Short is proudest of all her “beautiful and appealing animals that she’s done.”  Short has created pieces that include jaguars, horses, and crabs.

When asked the same question Zalkus said, “Sydney has shown beautiful growth both technically and conceptually this year…”

All of Short’s teachers hope to see her receive the success she very much deserves.

Another teacher that has helped her come a long way is Mr. Vinny Siracusano. Siracusano works for online art classes and has been working and teaching for Walt Disney Feature Animation Studios, in both California and Florida, for over 12 years. His artwork and technique can be seen in many feature films and multiple short films such as “Mulan”, “The Lion King”, “Lilo and Stitch” and “Brother Bear”.

“I also have to give a shoutout to all my public school teachers, Nicole Pappanduros, Jenna Mcknight, Jennifer Melendez, and Dawn Zalkus as they have been absolutely amazing role models,” Short said. She also said that being in their classrooms was the absolute highlight of her day.

Recently, Short has taken interest in Jesse Reno. Although she was only introduced to his art last year, “…it opened an entirely new style to me,” she said.  This allowed her to lay back, let loose, and enjoy her own art.

Her artwork lately has revolved around “the human effects on the journey of an animal” as she explains it. This includes climate change, abuse, and other similar topics.

“I really like the path of emotional pieces with more educational statements so I think I’ll keep going down this route.”

Short explained how her favorite pieces of artwork are more recent but she holds tons of value in her old artwork. “… the pieces I made at the beginning are a sort of purity, something I can never get back,” she said. Although her skills have bettered and she’s improved tremendously, she still enjoys and cherishes her “younger” artwork. She is quite proud and happy to move towards the future but she will always enjoy looking back to where it all began.

With art and skill comes frustration, but in the end, most can’t help but be proud of even the small successes. “As much as I’ve had moments where I hated everything about my art, I can always look at what I’ve accomplished and be proud of how far I’ve come.”

She’s had quite a few milestones and accomplishments throughout her life so far. At the age of six or seven, she put up an art show with the help of Boehm. Nearly three years ago, she also had the opportunity to showcase her artwork in a bookstore. Now in high school, she’s received an honorable mention in a 4X5 art piece show, was given a silver key from scholastic, and was granted a scholarship to SAIC for one of their summer courses.

Short has already planned for her future. She hopes to continue painting and follow through with a career revolving around her art. She dreams of one day walking into her very own artistic gallery, “preferably on a little beach town.” Art is something she is content with and proud of making a living off of and continuing daily.

Everyone is different and so hobbies affect them differently. For Short, she uses art as a way to express and release her emotions. She paints and draws whenever she is feeling stressed out or paranoid, she recently started turning towards art in order to document how her emotions were moving along.

Painting also helps her take things off her mind and simply work without putting in too much thought.

Some advice she’d like to give is , “Find something to be proud of,” she said. “If I’m not necessarily happy with a piece I’ve made, I’m at least proud of the process and my growth.” When she is proud and content with her art she notices it builds up confidence in her to attempt new things. One last piece of advice she’d like to give is, “I would also stay away from social media.”

She explained how being insecure about some work is common and something she also feels at times. Looking through social media, seeing talented artists showcase their work can sometimes make the situation worse which can also cause negative criticism towards artwork.

“I will miss having her in my class, she was an inspiration to all the young artists…” Boehm said. From starting at the age of 6 to accomplishing great achievements, all her teachers hope to see her progress through school and possibly into a career. Definitely go check out her art Instagram @sydneyelizas.art !