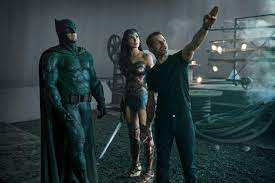 In late 2017, the film Justice League, produced by Warner Bros and directed by Joss Whedon and Zach Snyder, was released to less-than-stellar reviews. People complained about the abysmal CGI (some of which attached to Henry Cavill’s upper lip), the bland villain, the one-note characters, and a less than perfect story. This prompted a movement online, calling for the film to be redone, without Joss Whedon in the picture, and Zach Snyder’s original vision recreated on-screen…sort of. Due to the pandemic, and convenience’s sake, the film was released online, to HBOMax, in a 4:3 aspect ratio. Audiences and critics have mixed opinions; with audiences being overjoyed, while critics are less than impressed. However, everyone does seem to agree: it’s leagues better than the original cut. As your average movie critic and avid fan of all things nerd, including the comic realm, I think it’s fair to say the movie is…quite good. Not perfect, by any means…But anything is an improvement over the original Justice League. Or, Josstice League, as many have dubbed it.

The first notable thing to address is the presentation. The 4:3 aspect ratio can be very strange at first, but is quickly adjustable, and allows for the viewer to see more of the shot, without hasty cropping on the editing team’s part. Apart from that, the CGI is about the same, if slightly improved, and the colors are lacking in comparison to the original, but this isn’t a negative. It fits the tone a lot better and generally adds a lot to the scene. The actual quality of the video is quite nice, as well. The pixel count makes it very crisp and clean. As for costume design, set, props, everything was done about as well as the original, which is to say, great. Superhero movies often have a hard time looking bad, and this proves that.

The story is roughly the same as the original cut, with a few tweaks. For instance, a lot more time (that 4 hours came from somewhere, right?) is taken to flesh out its characters and why everyone is doing what they’re doing, like Cyborg and even Steppenwolf, who is now trying to prove himself as a likely prospect to Darkseid, a name that will send many of my fellow DC fans squealing. The tone, while not dark, is a lot less lighthearted than the original, which for many is a positive, including myself. While Joss Whedon is plenty funny, his dialogue often can feel quite forced and trying too hard for a laugh, which is why this cut (while not removing the humor; it still has plenty) feels like a breath of fresh air in comparison to the boatloads of Whedon-ism so many superhero movies have been getting lately.

The acting, while not perfect, clearly has a lot of effort put in. Henry Cavill, Ben Affleck, and Gal Gadot do great jobs making me feel their characters, and Ezra Miller was near perfection with his portrayal of the kind, funny, and energetic Flash. He was easily one of the highlights of the movie.

The only problems I have with the film are some minor ones. Obviously, accessibility was an issue. Having to make an HBO Max account just to watch a 4-hour movie is something that I was hoping I wouldn’t have to do, and HBO Max’s servers made it pretty difficult, as well. This was just something I experienced, but the servers were very slow and laggy. As for the movie itself, it had some pacing issues. While everything is generally paced well, (or it would have, if it were 2 hours) the length of the movie makes it feel a little slower. And while the color gradient does fit the tone and theme, it did feel a little dull, especially when the majority of the main cast wears black, gray, or very dull, muted colors. However, the Flash’s costume (which, by the way, looks awesome, and do not try to argue about that), much like his character, pops that much more across the rest of the League, and looks very nice, especially with the blue lightning and energy effects that surround him the majority of the time.

In short, not only is Zach Snyder’s Justice League a massive improvement over the original, it’s a decently enjoyable superhero movie as a whole if you can deal with some cheese, gray coloring, and a long, and semi-slow movie.