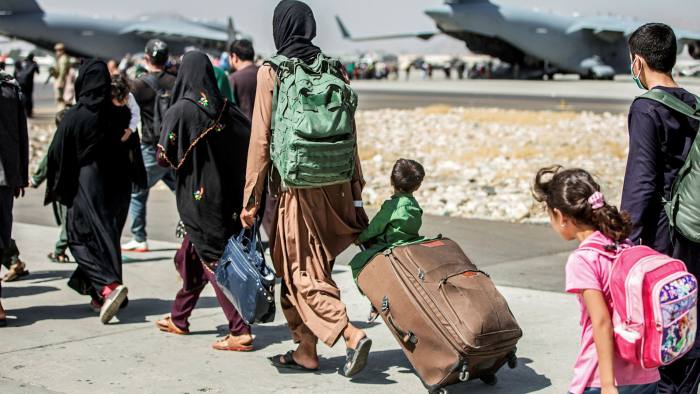 5.9 million Afghans are currently displaced as a result of the two-decade-long war the U.S. fought there, which means they are either seeking refuge in another country or are displaced in their own country, according to Brown University’s Costs of War Project.

For the U.S, welcoming these Afghan refugees into the country as permanent citizens is not only morally the right thing to do, but it is something we have an obligation to do.

The U.S. bears a great deal of responsibility for the desperate situation these refugees are facing.

The suffering the U.S. inflicted on the Afghan people began in the 1980s and 90s, when the U.S. armed the mujahideen – a patchwork of Islamic factions – to fight a proxy war with the Soviet Union, which occupied Afghanistan at the time. But after the mujahideen drove the Soviets out of the country, Afghanistan “fell into warlordism, and a brutal civil war,” involving the (U.S-armed) mujahideen, from which the Taliban emerged and took power, terrorizing Afghans. Then, the U.S fought a war there that killed over 46,000 Afghan civilians.

The Biden administration is so far making a good effort to accept the refugees. The military was able to evacuate 73,000 Afghans and foreign nationals in Afghanistan from the country before all American personnel left. The administration authorized $500 million for “unexpected urgent refugee and migration needs of refugees,” and President Joe Biden signed into law last week legislation that directs $6.3 billion to fund Afghan refugee resettlement programs.

Biden also kept a campaign promise to allow 125,000 refugees from various countries to enter the U.S. But that number is just a ceiling, and the U.S. is under no obligation to meet the limit.

We must, however, make every effort to do so.

According to Save the Children, a nonprofit organization that advocates for the human rights of children, the main reason refugees flee Afghanistan is so “their children [can] have a childhood, an education and a chance at a future.”

Many of us have the privilege of not being able to relate with the desperate situation these refugees are in. But they aren’t asking for much, simply a chance to live.