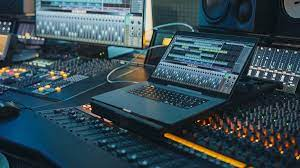 Music today is heavily saturated with the same act repeated by multiple people.  Many popular “artists” are simply just a copy and paste of each other, each having an almost identical sound to one another. Today’s music is boring- it’s all the same.  It seems the industry is seriously lacking in some diverse, raw sound. You might find yourself asking, “Why can’t the industry see this?” Well, well my friend, they do. Instead of working hard, exposing creativity, and seeking out hungry talent, the record labels have opted for convenience. That is autotune. Autotune allows for many talentless acts to make millions off of an image, rather than a talent. Though I am not making the point that autotune is bad and nobody should use it, it does contribute to homogenization in music. I have utter confidence in the fact that it is mainly autotuning, along with computer-generated sound, that heavily adds to the bland sound of today’s music.

It all started in 1989 when a certain man by the man of Dr. Andy Hildebrand, a research engineer for the oil company Exxon and a God to record labels across the nation, “Created a complex set of algorithms to interpret sonar-generated data and locate oil deposits far underground” (Clear Lake Recording Studios). Hildebrand had a passion for music and soon founded Antares Audio Technologies. Ironically, he later found that his system could be applied to pitch correction. And thus, autotune was born.

Now don’t get me wrong, subtle pitch correction can be useful for musicians all across the board. There are many talented singers like Rhianna, Beyonce, Adele, Charlie Puth, and many more who use autotune. But for souls who don’t know the first thing about a music note, it’s instead used as the glue and tape that hopelessly holds one together. Some of these popular artists today consist of Travis Scott, Katy Perry, Lil Uzi Vert, Dixie D’Amelio, Ke$ha, Lil Nas X, and Post Malone. If it wasn’t for the general public’s tolerance of repetition, their careers would not exist. It’s often surprising that humanity accepts less and less from the industry, although, believe me, the music industry isn’t exactly a class act.

Music today often contains no artistic value, no originality, and is often written not by the artists themselves, but the hip, young producers who think they have two cents in what the “kids” like. Nowadays, popular music often falls into the pop-rap category. An article from The Rolling Stone states, “Guess how many songs in the Top 10 biggest tracks in the U.S. last year were written by a solo songwriter? Zero. The year before that? Zero.”

Billboard Top 10 has shown that for the past eight years, pop and rap have dominated the charts. This is a clear example of homogenization. Don’t believe me? Well, let’s go back to 1978. The Billboard top 10 showed a much more exciting and diverse list of Soul, Rock, Disco, and Pop with songs like “Grease” by Franki Valli, “Use Ta Be Ma Girl” by the O’Jays, and “Miss you” By the Rolling Stones. Compared to today’s songs like “Circles” by Post Malone, “Savage” by Megan Thee Stallion, and of course, who can forget “WAP” by Cardi B, all of which fall into the pop/rap category.  Autotune causes popular artists to have a similar sound to one another, which in turn, is not only a convenience jackpot for record executives, but causes laziness on the artist’s part.  But I don’t blame these artists. If you’re making millions off practically no creativity, then why start turning those gears now!

While there is still no sight as to when this epidemic of computer-generated creativity will end, I can only look forward to what the music world has to offer in the future.