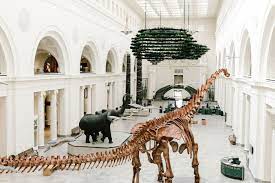 The Field Museum is one of the largest natural history museums with over 480,000 square feet. The museum, which was founded in 1893, is the most well-known museum in Chicago with two million yearly visitors traveling from around the world to visit the museum. The museum has around 65,000 exhibits to see and has nearly forty million specimens in its collection. However, with such a huge museum you surely cannot see it all. So what are the best attractions to see?

One of the coolest and fairly newest exhibits is the Wild Color exhibit. The exhibit opened on Oct. 22, 2021, and will close on Jan. 8, 2023. It is an interactive experience that shows the many color patterns, hues, shapes, and shades that can be found in nature. According to the Field Museum website, the coolest thing to see in the exhibit is a sensory room that shows the different shades of the rainbow through sound, texture, and light. While the exhibit is very exciting you do have to pay extra in order to see it. If you would like to go you could purchase a Discovery Pass which allows you to see all the free exhibits and your choice of one ticketed exhibit or a 3-D movie. The Discovery Pass is $32 for adult Illinois residents. Or you could purchase an all-access pass which allows you to see everything. The all-access pass is $38 for an adult Illinois resident.

Another exhibit to see is the very informative Evolving Planet exhibit. The exhibit opened on Dec. 21, 2018, and has no closing date. The Evolving Planet exhibit goes on for 27,000 square feet and walks you through 4.5 billion years of Earth’s history and the different species that were around at that time. Some fascinating things within the exhibit are a model of a 3.2-million-year-old creature called the hominid, and a skeleton of a Megatherium, a giant ground sloth. The exhibit also has the relocated famous Sue. Sue is a 40-foot-long, 90 percent completed Tyrannosaurus rex. She arrived at the museum back in 2000 and was placed near the entrance until she was moved into the Evolving Planet exhibit in 2018. Sue is so popular because she is one of the largest and best-preserved Tyrannosaurus rexes ever found. There is no extra fee needed to see the exhibit, only the basic admission fee to the museum, which is $24 for an adult who is a resident of Illinois.

The third exhibit worth taking a look at is the Hall of Gems and Jades. The exhibit is made up of two collections, the Elizabeth Hubert Malott Hall of Jades and the Grainer Hall of Gems. While there seems to be no information about how the Elizabeth Hubert Malott Hall of Jades started at the Field Museum, the Grainer Hall of Gems collection has been at the Field Museum since the beginning. Around 1900 a collection of Tiffany & Co.’s gems were donated to the then-new Field Museum. The collection opened a few years later in 1921 and has been visitors’ favorite since. According to the Field Museum, the gem collection has over 150 antique jewelry pieces and 600 gemstones while the jade collection has more than 450 jade pieces. Some of the best things within both exhibits are a 3,400-year-old ancient Egyptian garnet necklace and a jade object that was used in ceremonial burials from the Neolithic period. There is also a 97-carat Topaz which is the largest gem owned by any museum in the world. The Hall of Gems and Jades exhibit only requires basic admission to see it.

The Field Museum is such a fascinating place to go with your family or friends. There are always more things to learn and observe every time you visit. Next time you want to do something fun, take a trip to the Field Museum and see the Hall of Gems and Jades, Wild Color, or Evolving Planet.