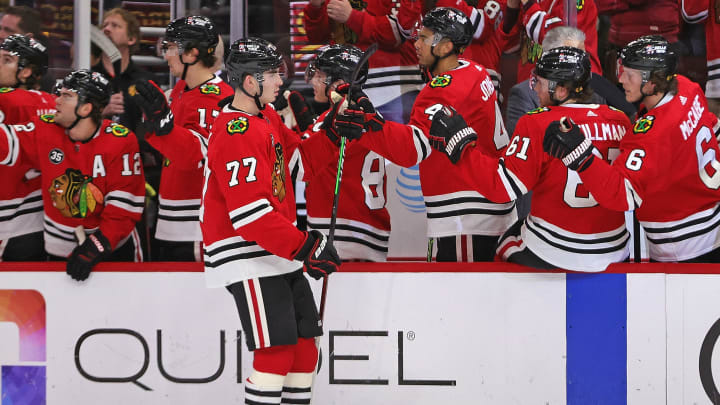 It is said that no matter what NHL game you go to, somewhere in the stands you’ll find a Blackhawks jersey. The Indian head surrounded by red, white, and black is a logo thought of by many as one of the number one logos in the NHL. For many reasons, the Chicago Blackhawks fanbase is one of if not the strongest fanbase in the NHL, depending on your fan bias. The Blackhawks have 2,735,079 fans, ranking them number one in the NHL. These fans have had their fair share of joyous times, celebrating the six Stanley Cups the Blackhawks won over the years. In addition to all the successful seasons, the Blackhawks and their fans have also experienced a lot of disappointment over the years. This past season wasn’t very much different.

This season was supposed to have so much promise. This was supposed to be the season the Blackhawks legitimately returned to the playoffs unlike 2020 when they made it only as part of an expanded playoff. The team’s captain, Jonathan Toews, also returned after missing the 2020-21 season. Everything was in place to have a good season. The Blackhawks season, however, has not been great. While the season is not over yet, the past few losses definitely point in that direction. The Blackhawks’ current record is 16-21-7, giving them 39 points through the first 37 games of the season. With the first 37 games gone, the team has 45 games to go to make up ground in the standings. In the past few seasons, the judgment bar for a playoff team has been 95 points.

With how many games they need to win to hit that 95-point mark, considering the team’s current record, I do not think that is possible for them at this time. The Blackhawks have about a 4-percent chance at making the playoffs at the moment. That number is most likely going to continue to go down as the year continues. At least the team has a lot of players they can move to bring in some prospects and draft picks ahead of the trade deadline.

To be fair, the Hawks have to adjust to new players and a new coaching staff. Under Derek King, the Blackhawks are 16-21-7, not bad for a team that was 1-9-2 under Jeremy Colliton, the previous coach. King might not be the long-term answer, but he has done his best during the short term. The team still has a long way to go. There are three main things that need to change for the Blackhawks in 2022.

The first thing that doesn’t come as a surprise to many Hawks fans: Kirby Dach needs to get it going. Dach has done his best throughout his first three seasons in the NHL. After a strong first season with 8 goals and 15 assists in 2019-20, he went to the playoffs with the Hawks and was arguably the team’s best center during that time. He then followed that season up with a wrist injury and only got in 18 games, scoring ten points during that time. This past season has seen Dach miss out on a lot of great opportunities. The young center still has a lot of time to get back on track, but one not-so-promising stat is the fact that his face-off percentage is at a career low. He is winning an average of 32.7 percent of his faceoffs, which is not great. Faceoffs are often looked at as not that important, and, while they might not directly determine a game, they do decide who starts with first possession, and Dach needs to win more draws for the team.

The second factor is just as obvious as the first: Patrick Kane needs to start scoring. He has had some assists in the past, but his goal-scoring total is not where he usually is. The team relies on him a lot offensively and he has not been living up to where he is usually at. Kane not scoring is a dangerous thing for the Hawks. The team relies on him to generate offense, and if opponents think he is not shooting the puck as often they will know he is going to rely on passing in the offensive zone. Kane has a killer shot, but it has not been as lethal the past couple of years. Kane averages a shooting percentage of 11.8 in his career. During his crazy offensive seasons, he averaged a shooting percentage of 16 or higher like in 2015-16 and 2012-13. This season, though, Kane is at an all-time low averaging just 7.4 percent of his shots crossing the goal line. The Blackhawks need to get Kane scoring again, and I think that means setting him up on the power play more and making sure he is out there with offensively-minded players that can set him up. DeBrincat and Kane have built great chemistry on the ice. He just needs to connect with his teammates and get scoring.

The biggest change the Blackhawks need to make is concerning their future. The team has been trying to get by and focus on the next game. But someone needs to be a leader for the future of the franchise. The longest contracts on the offense belong to Tyler Johnson and Brandon Hagel, none of the goalies that have played in the NHL this season have a contract for next season, and the team doesn’t have a first-round draft pick in the upcoming draft. Former general manager Stan Bowman made the decision last July, just before the draft, to relinquish defenseman Adam Boqvist (the Hawks’ 2018 first-round pick), their No. 12 overall pick, and a 2022 first-round pick in a trade with the Blue Jackets for defenseman Seth Jones. The Blackhawks are not in the best position right now, and they need to think about what they can improve upon for the future especially when their star players leave.

Off the ice, the franchise is involved in a major scandal. Former first-round pick Kyle Beach’s lawsuit claims that in 2010 the Blackhawks did nothing to address his complaint of being sexually assaulted by the team’s video coordinator at the time, Bradley Aldrich. Instead, former Team President John McDonough, former General Manager Stan Bowman, and former Head Coach Joel Quenneville among others did not want a distraction as the Hawks tried for its first Stanley Cup in 49 years. Finally, after winning the Stanley Cup in 2010, management quietly asked Aldrich to leave the organization but he still got his day with the Cup, his name on the Cup, and severance pay. A few years later, Aldrich was convicted of sexual misconduct of a minor. The Beach lawsuit negatively affected the Blackhawks and their name. Despite this incident, the Hawks still have a booming fanbase with high hopes for the future.

If the Blackhawks have all the positive factors go well, then they will be a force to be reckoned with. Hopefully early in 2022, we will have an answer to the front office and the coaching staff, as well as what the team’s plan is moving forward. The Chicago Blackhawks have a lot of work to do in order to turn things around. They have the pieces they need to thrive, with a good mix of young players and veterans. If their coach can get them in the right headspace and direct this team properly, they might not finish with mediocre results and in future seasons, make a run for the Stanley Cup.