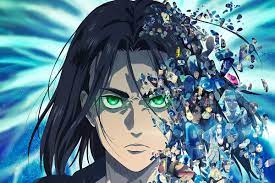 In this world, there are many things people like to do to entertain themselves: collect cars, toys, cards. One of the things to do to keep yourself interested is watch anime. Anime has many fans; they can be new or everlasting fans. Though there is one thing all anime fans have in common: they always have the first anime they watched and a list of the top three anime. Since there are so many kinds of anime it is really hard to choose a number one so I will be making a list and explaining why they are in the top three animes so people can choose to watch them.

The first anime may be really obvious for most fans but that is Attack on Titan. There are already many people who think the same for this anime. Attack on Titan is set in a fantasy world where giant humans are eating people called titans and attacking the last remaining humans trapped inside three walls. Some try their hardest to survive inside the wall while some try to fight the titans but never win. There really is no main villain when it comes to Attack on Titan, and that is why it is number one. We start on the side of the humans trying to survive, thinking that the titans are the enemy, but then it changes. The more you get into the series, the more you find out, and the more you question who the real enemy is. With the final season coming out you already know that it has the most shocking things in it. This anime does have a lot of blood and a lot of death but that makes everything all the better when your favorite character triumphs over that.

The second on this list is JOJO Bizzare Adventure. The hit or miss of the anime is how they explain what is happening in it. When someone does anything relatively important it will probably be repeated by a character. JOJO Bizarre Adventure takes place in a fantasy world similar to our own. The first parts take place and the main villain is the start of many bloodlines. The main protagonist fights to protect the one he loves. That is most of the protagonists so why is this one so much better? Every season has a different protagonist but it is still related to the others because of their blood. Each protagonist has a kid and the next protagonist is the kid or the grandkid. Each person has their own power or stands after a few generations have passed. A stand is something all the main protagonists and antagonists have which they use to fight each other. To make stands simple they are another person who “stands” behind you who have powers from your soul. The good guys use their stand to beat the bad guy and the bad guy beats the good guy with their stand. So if you’re watching this anime be prepared to see generation after generation fight to protect the world.

Demon Slayer, Dragon Ball Super, and One Piece. Those anime didn’t make my list but they are still good anime. The final anime on this list is Seven Deadly Sins. This anime is about seven main protagonists who are betrayed. The first part is trying to prove that they were betrayed and they were in the right. After that, they learn about a great evil that is needed to be slain or else the world may perish. The seven protagonists go through many hardships but they never give up knowing that they are the only ones able to save the world from evil.

Seven Deadly Sins is the most simple anime on this list but it is still very good. Attack on Titan and JOJO Bizzare Adventure does have a lot of mystery but you will understand what’s happening. I hope that this list is helpful when trying to find new anime and I do hope you check them out.