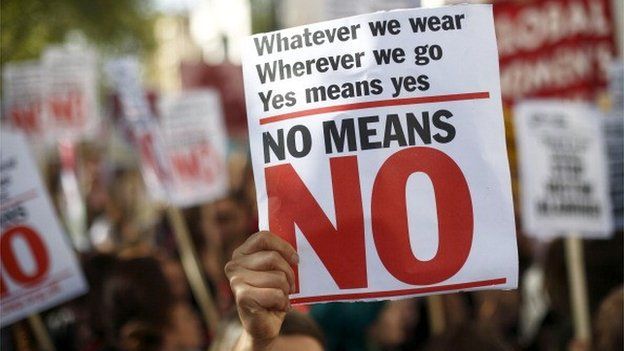 There are multiple myths about rape that are prevalent in our society, but when someone speaks of the rape myth, they are most likely referring to “the idea that some women invite or enjoy rape and get ‘swept away’ while being ‘taken’” (Brinson 1992). To any decent person, this is clearly incorrect and seems completely impossible for anyone to hold this idea to be true. However, this idea is ingrained into our heads and into many parts of our culture.

Think of the majority of romance films and novels. They all generally follow the exact same plotline. Guy likes the girl, the girl repeatedly says no, the guy refuses to stop persisting, the girl realizes she had it all wrong and that she’s in love. Examples of this include but are not limited to:

These films are all vastly different, but share the same underlying message: Men know what women want, and sometimes she just needs some extra force to get her to understand. If you shove something down a person’s throat for long enough, they will realize they like it.

This myth is common in the music industry, as well. Popular songs that we frequently hear and casually sing in the car on our way to work romanticize the idea of ignoring the word no and completely disregarding consent. We obviously know that what is being described in songs like this isn’t okay, but by constantly hearing it portrayed around us, it becomes more normal than it ever should have gotten the chance to be. Examples of this include but are again, not limited to:

This is prevalent in our school as well, although not as obvious as it may be in pop culture. While trying to research the rape myth, one would find that it’s blocked. How are you supposed to learn about the faults and lies that surround us if every time we try, it’s censored? Teachers refuse to teach about it, and try to gloss over the topic any time it may be brought up, on the grounds of “not making anyone uncomfortable.” The topic of rape shouldn’t make anyone comfortable. You should feel uncomfortable when addressing the fact that our society allows sexual violence to go unnoticed. But that doesn’t mean the topic should be ignored. That doesn’t rationalize ignoring the topic completely. By ignoring it, you allow the myth to exist, allow it to grow, and you further become a part of the problem.

Rape culture is no misconception. It is real, and it is our culture. Everywhere around us, myths such as this are allowed to persist, which further engrains the idea into our heads, and makes it seem acceptable. Don’t neglect it. Acknowledge the problem.