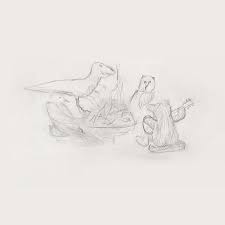 When I saw that Big Thief’s new album Dragon New Warm Mountain I Believe In You would be 80 minutes long, I was a little skeptical. Not because the band isn’t talented. They certainly are, but because this new album is double the length of their longest album. Even for the most talented bands, double albums have a tendency to become boring and overstay their welcome. However, I’m happy to say that this album not only earns its length but is Big Thief’s most exciting and diverse album yet.

Big Thief’s strengths in their music have always been fairly consistent and immediate – layered folk-rock instrumentals combined with quality songwriting and emotive vocal performances. Although these components are present in full force on the new album, what makes Dragon so compelling is how the band augments these elements with expanded instrumentation, new production styles, and a lighter, more immediately catchy style of songwriting.

The opening track, “Change,” is a relatively standard song for the band, an emotive, sentimental ballad backed with gentle acoustic guitar and pleasant vocal harmonies. This track does a great job of setting the tone for the album because it captures everything that has made the band great up until this point, establishing their sound for the listener before they experiment with new sonic palettes.

The very next song, “Time Escaping”, immediately showcases the band’s intentions to try new things on this album. What is most immediately ear-grabbing about this song is the raw, distorted percussion that brilliantly contrasts with the upbeat melodies and soaring chorus. It’s a more fun and playful sound than fans are used to from the band, but they pull it off incredibly well.

The rest of the album continues this blend of continuing what made previous Big Thief albums so great and also exploring new styles. The title track combines a gentle fingerpicked acoustic guitar and gorgeous vocal performance with dreamy, psychedelic production that creates an enveloping atmosphere. “Little Things” is a driving rock number that continues the optimistic, upbeat feel of the album. “Dried Roses” is a melancholy ballad that strips back the instrumentation to a vocal, violin, and acoustic guitar, and creates a very emotionally potent effect.

All throughout this album, I never once felt like Big Thief was writing songs without intention and ambition. I was constantly pleasantly surprised by the new ideas they brought to the table, and by the time the 80 minutes of the album had passed, I felt like the album had just started.

Overall, Dragon New Warm Mountain I Believe In You is one of the band’s best albums yet. It showcases Big Thief’s ability to write emotionally compelling songs, as well as introduces new sounds and styles for the group. Not only do they include a wide variety of instruments, their emotional range on this album is quite diverse, and helps create the group’s most complete and fully realized album. In spite of the album’s lengthy duration, I never felt bored once, a testament to how successful Big Thief were with this project.