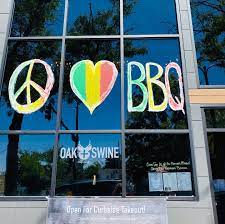 To eat or not eat, that is the question. Batavia’s new and very own Oak and Swine restaurant first opened on Wilson St. in 2019 being the newest restaurant to open in downtown Batavia in five years.  Labeling themselves as a “Texas BBQ” establishment, I embarked on an adventure intending to go to Texas, but that was nothing short of misleading. Oak and Swine offers an interesting selection of tastes, from south of the border to classic American grille. The Texas taste, however, was not one of them.

I called to see if they took reservations, to which they did not. When I first opened the door to be seated, I was surprised by the size of the main floor. On the first floor, there was a bar and three tables. In total, I saw one server with the bartender occasionally helping out. Though it was small in size, I had no problem getting a table. Of course, I arrived at 5:30 so I cannot imagine what it was like later. The atmosphere of Oak and Swine was somewhat surprising for what it is labeled as. The lights were in jars and the walls were covered in clean, gray, fake wooden panels. The floor was concrete and the overall structure is a loft. Not surprisingly enough, the clientele consisted of young millennials. And just to give you a clearer picture, the bartender was wearing a beanie. That doesn’t need any further explanation.

The menu was small but had many diverse options such as brisket tacos, Nashville hot chicken, and a jumbo-smoked Chicago dog. After a few minutes passed, the server brought over three choices of bbq sauce: one sweet, one Turkish, and one vinegar-based. With one being too much, one not nearly enough, and one being just right, I felt like goldilocks. But this isn’t a fairytale. Soon, and after careful consideration, I ordered the pork taco. Yes, a single taco. Going for seven dollars, the pork taco was good, but very much missing any sort of bbq aspect. My acquaintance ordered a pulled pork sandwich with a side of elote and beans. The pulled pork sandwich, going for $17, was good, but nothing to brag about. The sides, however, were a different story. The elote was perfectly seasoned and contained just the right amount of spice. When it came to the beans, they were nothing short of disappointing. When you go to a bbq restaurant, normally, one expects the beans to be bbq. It’s just tradition. Now, not that there’s anything wrong with breaking tradition, but when it comes to beans, tradition should never be broken. In total, the meal of two entrees and an appetizer came to a startling 56 dollars.

Overall, Oak and Swine is a fine establishment for people who want to empty their pockets and eat hipster food. Oak and Swine labels themselves as “Texas BBQ” without any of the Texas charm. The food overall wasn’t bad but to insinuate Texas roots was an injustice to the state as a whole. Although, I suppose they did hit the nail on the head with one aspect: it was hipster, expensive, and loud – just like Austin, Texas!