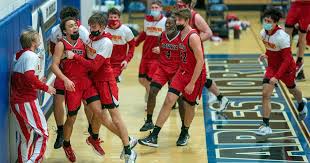 Batavia Basketball has its best season in years going 20-11.

At 20-11, this was Batavia Basketball’s best season since 2017-2018. After a hot start to the season, winning six straight, they finished fourth in the DuKane Conference and lost to a talented Glenbard North team in overtime to end their playoff hopes. Batavia finished behind Wheaton-Warrenville South, ranked 12th in the state; Lake Park, ranked 89th in the state; and St.Charles North in their conference. The Bulldogs were ranked 90th in the state.

This was the first season in a couple of years to wear Batavia had fans back in the stands. The arena was electric for every game, and the Bulldogs fed off this energy. Batavia was 9-4 in home games this year. The dawgs were also fantastic in the clutch, going 7-4 in games decided by less than five points. The Bulldogs became accustomed to putting points on the board as they have scored more than 70 points seven times this season.

This team had looked slightly different than teams of the past. It was comprised of all upperclassmen and 11 out of 18 players were seniors. The starting lineup was all seniors as it included Trent Tousana, Alex Taylor, Charlie Saul, Ethan Ivan, and Austin Ambrose. Key bench players included AJ Sanders, Josh Denault, and JP Chaney. AJ Sanders and Josh Denault were also seniors, adding to the high amount of seniors.

Batavia had high contributions from their stars. Trent Tousana averaged 16 points per game and 4.5 assists per game. He was named to the Daily Herald All-Area team and the All-DuKane Conference team. He was a special mention for the IBCA All-State teams. Ethan Ivan scored his 1000th point this season in a game versus the Bogan J-Hawks. Ivan was also named to the All-conference and Daily Herald all-area teams. He was also named to the IBCA all-state 3rd team. Austin Ambrose was even a special mention for the Dukane all-conference team.