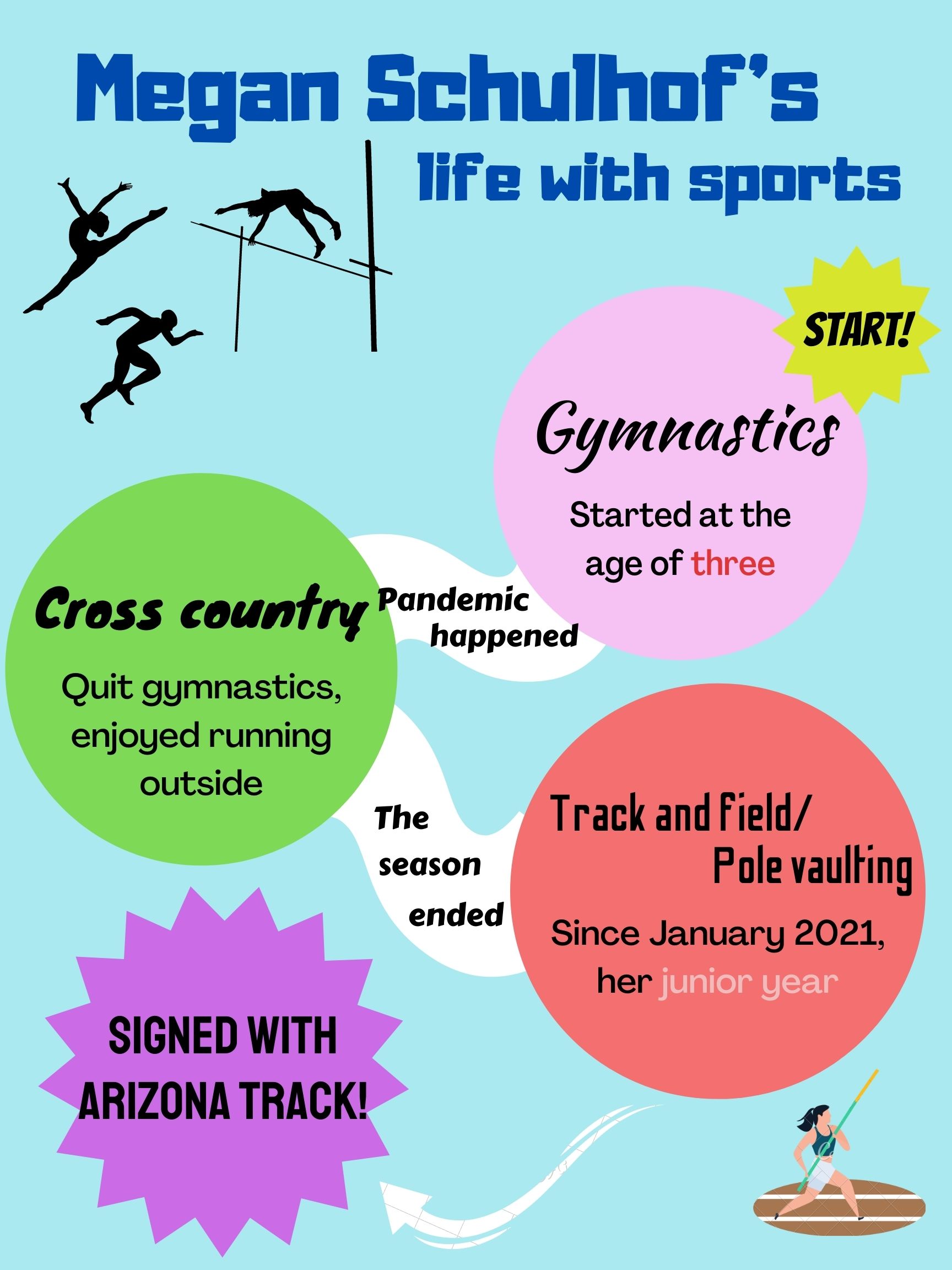 A senior girl, Megan Schulhof, who has been working hard in track and pole vaulting, has made one of her dreams come true. The coach, Justin Allison, saw potential in her, resulting in her signing with the Arizona track team for the next four years in college.

Schulhof started her sports life with gymnastics at the age of three and continued it for a long time. During the Covid-19 pandemic, she participated in Zoom calls and continued training. She found herself enjoying not being inside training 25 hours a week, and felt it was better for her to enjoy her life more outside of gymnastics. She went back to gymnastics after the pandemic until August, deciding to quit gymnastics and join cross country. “I wanted to continue to train for something, I always have been training hard for something,” Schulhof said. “I could not imagine my life without sports.”

Schulhof’s friends were all planning to run in track after the cross country season last year. Some of her friends suggested to her that she should try pole vaulting, which some of her gymnastics friends did. She decided to start pole vaulting, but she could not train at Batavia because of the pandemic precautions; therefore, she trained at a new club in Shorewood, Ill. Her parents were nervous about an hour’s drive there, which is a big-time commitment for a one-hour session. Although there was an obstacle to train pole vaulting, she enjoyed it a lot. “I absolutely love it! The environment is so energetic and encouraging. I also love my team and competing/training with them,” she said. “Pole vaulting is always the highlight of my day and I love practicing.”

“Surprisingly, it was not hard at all for me,” Schulhof said of signing with Arizona track. She talked to some teammates who graduated and went to the school in Arizona. They suggested she look for a pole vault-specific account for the Arizona Track team, and she reached out to them. The coach responded within five minutes, even though the lowest standards to get a spot on a team was 11 feet, and at the time her personal record (PR) was only 10-feet, 6-inches. “I was pretty excited he saw potential in me from the start even with a low PR,” she said. About a week later, the Arizona track team was in Chicago for a meet and the coach invited her to come to watch the meet. He offered her a spot when she talked with him at the meet.

She was longing to sign with Arizona track. “I also heard back from some other schools and visited but no one else had better coaching ability and the environment than the coach and Arizona track,” Schulhof said. “(Signing with them was) Like a dream come true. From the start, I always thought making it on a college team would be the atmosphere I wanted and to have the opportunity to continue doing what I love. I wanted it badly and did everything in my power to improve my pole vaulting so it felt like it was all worth it.”

She thinks that her accomplishment would not have been done without her parents, friends, and coaches’ support. “My parents were definitely happy the time commitment was worth it. I could not have done it without any of them. They all supported me a tremendous amount.”

In making one of her dreams come true, she has a positive attitude toward the next four years in Arizona. “I am so excited! I can’t wait to continue being a part of a team and hopefully positively contributing my energy and vaulting abilities,” she said. “I am super thankful to have an experienced coach next year. Because of the lack of vault coaches, most collegiate teams with an experienced coach look for vaulters jumping much higher, so I am lucky he sees enough potential in me!”

In the course of her sports life, she hurt and broke different things. As a gymnast, she used to ignore a lot of injuries because of coaches and pressure. On the other hand, the atmosphere at pole vaulting was much different. “Coaches cared a lot more about me but when I started having back pain around March 2021 I ignored it,” Schulhof said. “That was by far the most painful injury for me.” She still has pain today and it will never fully heal but she has a positive mindset and takes rest periods when it flares up. She is a hard worker who never gave up and trusted her abilities in order to realize her dream.