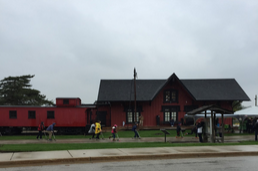 Batavia citizen set out to break the World Record for the largest kick scooter parade on April 24 at 10 a.m. Batavia was able to gather 180 participants but that was not enough to break the world record.

Batavia citizen Randy Simonian has been organizing the event. The event will be held on the Riverwalk at Houston Street and North Island Avenue. There are only a few requirements for the parade to qualify. Each participant has to travel at least two miles, each participant has to be older than 10 years old and has to be riding a nonmotorized scooter.

“I am looking forward to breaking the World Record,” said Glenn Albanese, a sophomore at Batavia High School. “This will be great for Batavia, it will help bring the town together.”

The World Record for the largest kick scooter parade was set in New Zealand, in 2013 with 489 participants. Batavia is planning on getting 1,000 people to the event.

“I think that we can do it,” said Carol Stritmatter, a tax-paying citizen. “Batavia is a town that is determined and will get the job done.”

Each person who is in the parade must pay five dollars to join. All of the money the event raises will be donated to Batavia United Way and CHIP In Batavia, a charity that benefits students in poor living situations.

“This World Record is doing great things for the City of Batavia,” said Brayden Callipari, a sophomore at Batavia, who is planning on going to the event. “It is a great thing having all of the money being donated to underprivileged kids in our area.”

The 2-mile-long scooter parade will be going through downtown. The 2 miles will take approximately 30 minutes. The route will be along the Fox River. Previously Randy Simonian, who helped coordinate the event, attempted to break a World Record last year. Simonian attempted to break the Worlds Largest hug but was unable to do it.
“The kick scooter parade is a great addition to Batavia,” said Trevor Hocking, a sophomore at Batavia High School who will be attending the event. “This event will be making history and I am proud that I can be a part of this.”