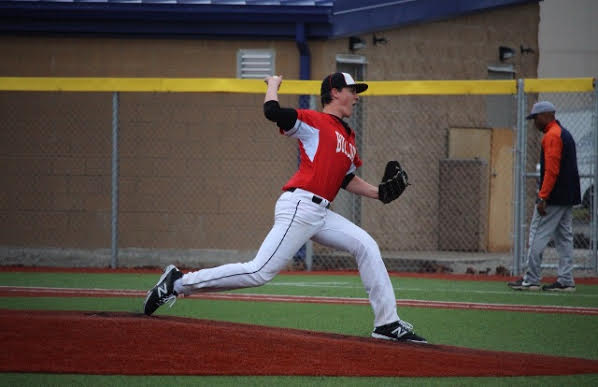 Most athletes are either hard working or talented. It is rare to find both, but Glenn Albanese Jr. is both dedicated and a naturally gifted athlete.

Standing at six feet and six inches tall, two-hundred and twenty pounds, Albanese Jr. is a student-athlete at Batavia High School. As a 16-year-old he verbally committed to play for the University of Louisville in 2017. From a young age, he played sports including soccer, baseball, basketball, hockey and football. His parents and two sisters said that he had done very well in sports from a young age.

“Glenn has been a great athlete ever since he was a kid,” said Glenn Albanese Sr. “He has alway done very well and enjoyed playing.”

After a few years of soccer, basketball, and hockey, he decided that he was going to focus on baseball and football. He began playing baseball when he was six years old. Albanese Jr. played for Batavia Youth Baseball (BYB). He pitched most of the games for his team and would go to the batting cages several times a week.

Albanese Jr. went out for the Wasco Wildcats travel team. This team has ten to 15-year-old kids all over Illinois. He started on the A team as a pitcher, and a third basemen when resting his arm. Albanese Jr. would practice extra with his dad several hours a week.

“I feel that trying out for Wasco was a great decision,” Albanese Jr. said. “I feel that Wasco helped me become a better baseball player and prepared me for the high school level.”

In the 2012 football season, Albanese Jr. made the A team and was a starter. He went to Don Beebe’s speed training camp several times a week, to get extra practice. According to his teammates, he was one of the best on the team.

“When Glenn first started football he was a natural,” said Jordan Moore one of Glenn’s teammates at Batavia. “He was amazing. He was one of the best players in the grade.”

When Albanese Jr. came into high school he played football for the sophomore team.    Albanese Jr. had a total of three touchdowns last year and 84 yards.

“It was crazy to see Glenn out on the field playing for varsity as a sophomore,” said Brayden Callipari, a friend of Albanese Jr. “He has put in lots of hard work and deserves to be out there.”

When spring came around for Albanese Jr., he played baseball on the sophomore team as a freshman. He started as a right-handed pitcher having four different pitches: fastball, curveball, changeup, and slider. His fastball last year maxed out at 85 miles per hour. Glenn threw a perfect game last year against Elgin. In addition to going to practice Glenn would go to a pitching clinic.

“I was very impressed with Glenn’s performance last year,” said Michael Morrison, Albanese Jr.’s teammate. “Glenn has a lot of talent and did extremely well.”

When fall came around in the 2014 football season Albanese Jr. played football again. He played tight end again and special teams for the varsity team. Albanese Jr. had a total of eight catches and a total of 77 yards. He continued to go to Don Beebe’s as well for more practice.

In the 2015 season Albanese Jr. made the varsity team as a starting pitcher. Albanese Jr. pitches once a week to rest his arm. Albanese Jr.’s current Earned Run Average (ERA) is a 2.0. Albanese Jr. has pitched in a total of five games so far this year and has won four of the five games. His current fastball can reach a speed of 90-miles-per-hour. Going to special training one times a week allows Albanese Jr. to improve his form.

“Watching Glenn play this year is really fun,” said Albanese Sr. “He is having a great year so far.”

“I am very excited to being playing for Louisville,” said Albanese Jr. “I really liked it there and think that it was the best school for me.”

“This is a very time-consuming process Glenn has every year,” said Albanese Sr. “But I am extremely proud of him.”