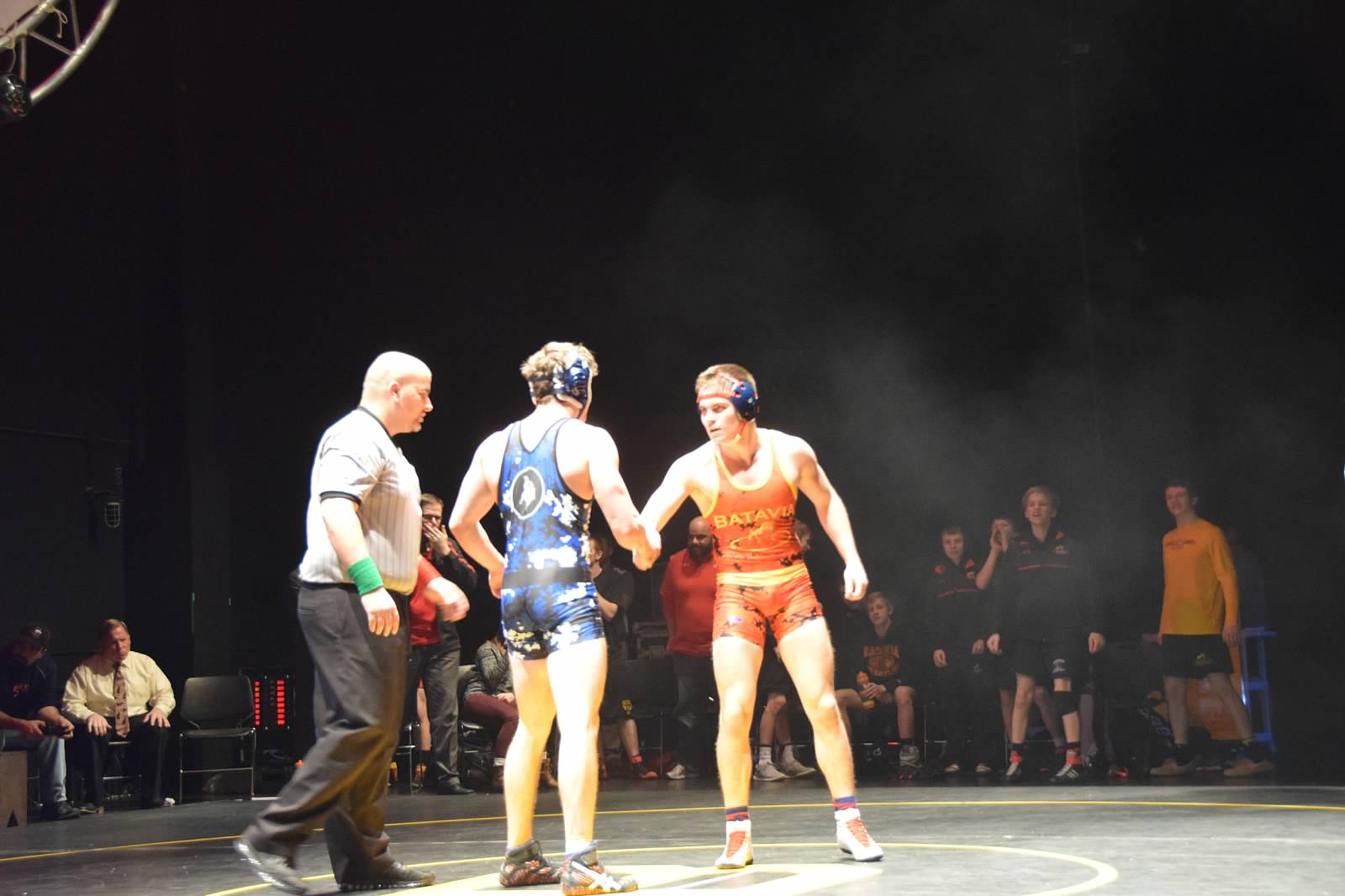 As Jake Birkhaug ended his wrestling season February 7 and began auditioning for the school play ¨Little Brother¨ a few days later, all amidst his studying for AP classes and working towards improving the school as student ambassador, many wondered if Jake’s effort was going to be worth it. He would tell you yes, it certainly has been.

Jake Birkhaug is a senior at Batavia High School and has had a high school career which featured athletics, politics, and the arts. Birkhaug’s high school experience has been diverse, to put it into one word.

Through his constant activity, whether it be athletics, theatre, politics, or just giving back to the community, Birkhaug has earned a nickname of ¨modern-day Renaissance man¨. Birkhaug is nothing short of deserving of that title based off of his senior year alone.

For Birkhaug, the 2014-2015 school year included playing  on a conference championship team in football and wrestling, leading a record breaking wrestling team as a captain, starring in the school play ¨Big Brother, capturing honor role status, participating as the Batavia school board student ambassador, and deciding to further his education at the prestigious Hope College in Michigan.

As Birkhaug is leaving Batavia next year and attending Hope College, a Christian school in Holland, Michigan, his experiences here have seemed to have given him some preparation.

¨Being diverse I hope has prepared me to be able to enter any room or situation and feel comfortable and like I belong,¨ Birkhaug said.

Birkhaug’s multi-sport athletic career can be described as nothing but successful. Birkhaug was on a state and conference championship football team and was a captain for a conference title winning wrestling team. His busy athletic life has given him a variety of teammates, but perhaps none of them were closer to him than Noah Frazier who was a football and wrestling teammate..

¨Jake is what I feel is the epitome of a student-athlete,” Frazier said. “He is a great athlete, but is also involved in the school, arts, community, and so much more. His contributions to Batavia as a community are unbelievable, and I know everyone will miss him here come next year.¨

When wrestling teammate Joe Posledni was asked one word he would use to describe Birkhaug he came up with an immediate answer: ¨leader¨.

¨Not in a way where he is always yelling and being vocal necessarily, but Jake leads by example,” Posledni said. “He is a kid that always does the right thing, and you like to see a kid like that succeed as much as he has.¨

The highlight of Birkhaug’s athletic career came on the very stage he performed the play “Little Brother” as the role of Daryll. Capturing the UEC championship under the lights in front of 800 people came before his state title football game in 2013.

“”On the BFAC stage under those crazy lights, winning the match of my life, and putting Geneva into the ground with my brothers.” said Birkhaug about the conference championship.

Another highlight of Birkhaug’s career at Batavia came on the very same BFAC stage he captured a title with his wrestling team on.

¨I was Daryl Glover in Little Brother, I was a lead,” Birkhaug said. “I had the third largest role. I loved every minute of the experience.¨

Many students and teachers attended the recent production, including Jake’s very own wrestling coach, Scott Bayer, who notes that Jake’s performance was ¨phenomenal¨.

¨Jake is essentially what many fathers would want their son to turn into,¨ Coach Bayer said. He is ¨so diverse and hard-working… Amazing.¨

But of all the people Birkhaug interacts with, he spends the most time with his brother, Jordan, who is also a wrestling and football teammate for him. In fact, Jake described his brother Jordan as his ¨best friend¨ through the years.

¨I’ve spent my whole life watching Jake play sports and act, and I’ve always enjoyed watching him perform in both ways,¨ Jordan said. ¨We’ve had our fair share of fights but I’ll miss him a lot once he’s at Hope¨.

One thing that Jake is specifically thankful for is being placed in multiple positions of leadership. Birkhaug has always been a passionate and fearless leader, which has certainly helped him attain the role as the school’s ¨student ambassador¨.

¨Learning how to lead and not dictate, and getting to have a positive impact on those you are leading,¨Jake said of what he has learned most from being a leader. ¨A leader asks the members of his team to follow him, but leads by example and earns respect rather than commands it.¨

Throughout his high school career Jake Birkhaug has been a phenomenal athlete, actor, and leader, which is how he has earned the title ¨modern-renaissance man¨ by many of his peers and leaders. As teammate Noah Frazier puts it, “His contributions will be missed.”