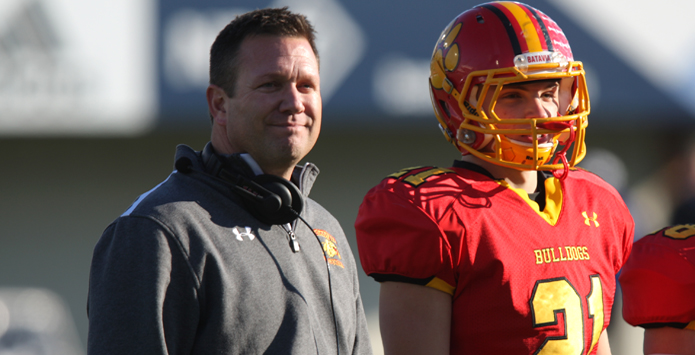 It’s no surprise that the Batavia Bulldogs are in the playoffs for football again. With a record of 8-1 it looks like they could advance deep into the playoffs again this year. Coach Dennis Piron has very high hopes of this season,  “We’re at a point here now where we can compete with anybody in the state of Illinois, we’re that good!”

Piron just won his fifth consecutive UEC River State Conference Championship, led by the team’s  explosive offense that has included quarterback Kyle Niemiec, who has thrown for almost 2000 yards and has a 109 QB rating. Another player that has contributed a lot to the team is Zach Garrett, the running back, who has rushed for over 900 yards and got at least 100 yards a game. But there’s no doubt that Canaan Coffey, their star wide-receiver, has made it possible for them to be so successful. With over 800 yards, seven touchdowns, and a new school record in receptions, he’s usually a difference maker in the game.

Not only does a team need an explosive offense but they need an outstanding defense to guard the end-zone. The defense is led by Matt Holm, who has created an all-star defense with both an outstanding line and secondary. Some players that “stick out” are Colin Thurston, their middle linebacker, who has over 63 tackles and 4 sacks. He was definitely the leader they needed this year. They also have Derek Nutley, defense linemen, who has broken the record for the most sacks in a season for the Bulldogs and has the third most in the state with 14.

Before Batavia played Pekin Coach Piron sat down to answer a few questions with The  Spectator.

Q: What do you think of Pekin?

A: “Well, they’re big and they’re strong. They’re playing in a high quality football league. Football is very important in that conference. Those programs put a lot of energy into their offseasons, as you can tell from the size and strength of their players and they’re going to be extremely well prepared and very well coached.”

Q: What do you think of Batavia’s position in the bracket?

A: “We earned the high seed. Honestly, I think that the coaches in the state of Illinois know who the best teams are. They need a better system than the points system.”

Q: What’s been the most important factor for the team this season?

A: “I would say with any team the relationships and bonds they build in their offseason. I think with every other group we have, as little kids they grow up in this community and think about what could be and what might be and those visions and those dreams drive groups of kids to really good performances. We have very bright football players.

The fitness, strength, and conditioning, is all out of the way and so now the other part of the game, the mental part of game, our kids are really good at.”

Q: What has losing to Naperville Central this year and Mount Carmel last year in the first round done to the team?

A: “I don’t think anything really, I mean those are high-quality teams that we played against. I will say I don’t think we played a very good game against Naperville Central. We didn’t approach the game with the appropriate sense of urgency or the importance, or stress the game deserves so I think on that night we kind of went through the motions a little bit. Last year against Mount Carmel, that was just a great football team. They were a really good football team. We’re at a point here, now, where we can compete with anybody in the state of Illinois, we’re that good. We’ve continued to elevate our play here on an annual basis. And that’s pretty cool.”

Q: Do you see any sophomores like Reggie Phillips and Michael Nemick making a difference in the playoffs?

A: “It’s awfully hard to do that. I think where they could make a difference is first of all, in practice, providing us with depth and maybe a different look or feel. Though I don’t think any of those young men will play a major role that are coming up with us, I do think that that additional depth and confidence that we have, that we have other players available is big. But more importantly for the whole sophomore group. When you are able to take some of your sophomores and slowly make them into varsity football players with a playoff run. If you can get a playoff run that is really, really important.”

Q: What do you think our shots are at state?

A: “I think they’re as good as they’ve ever been.You know have to get a break here and there, and you have to play mistake-free football, you have to be healthy, and we are all of thoose things. You have to play who you have to play. I will say that our road is probably a road that if you get there that you’ve earned your spot because you’ll have to get through a Chicago Simeon team who is a playoff powerhouse and you’d have to get though Cary-Grove.”

Q: How big of a game do you think it would be if Batavia played Geneva in the State Championship? Picture Courtesy of the Daily Herald