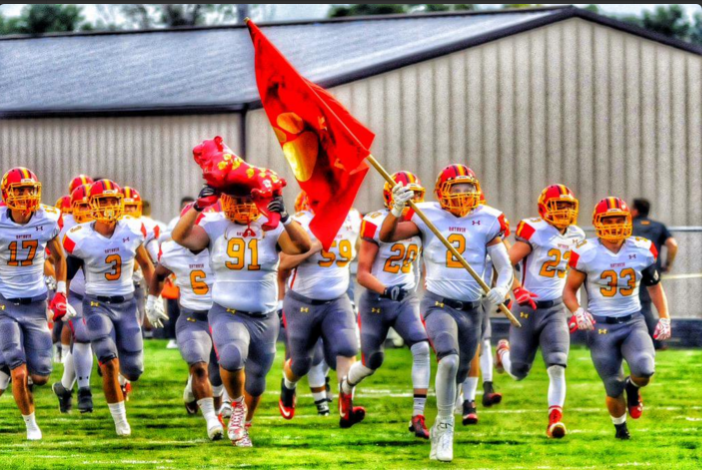 Sadly, it’s over. Sadly, the Friday night lights aren’t going to be turned on for another year. Sadly, the Bulldog stadium won’t be used for ten months. And sadly, the Battlin’ Bulldogs will be losing 28 seniors this year.

“There are no words to describe our success this season,” said Quarterback Kyle Niemiec. “We made history and broke many records. Our hard work this offseason showed on the field this year and we had fun while doing it. Everyone played for each other. The memories created this season will last me a lifetime.”

The Bulldogs had an outstanding season, again. They went 8-1 in the regular season, were Upstate Eight Conference Champions for the fifth year in a row and made it to the quarterfinals in the IHSA playoffs. Canaan Coffey also broke a school record for the most receptions in a season which will be very hard to break. Plus, Coach Piron also remained 27-0 when playing away in his career as head coach at Batavia High School.

Throughout the season the Bulldogs showed resilience by taking on big 8A schools and putting up a fight. They played three 8A schools: Oswego, South Elgin and Naperville Central. They beat all of them except Naperville Central. However, that didn’t seem to slow them down because the next week Elgin came to Batavia and got their butts kicked in a 49-0 win for the Bulldogs.

“The football season went great. It was very sad to see it come to an end,” said middle linebacker Colin Thurston, “Winning conference for the fifth year in a row as well as going undefeated in it again was a big goal. Also, Batavia had not won a game in class 7A before this year. We all wanted more, but we have to be proud for making the run we did and having the awesome season we had. I’m proud of what this team accomplished and I’m glad to be able to say I was apart of it. With all the memories made from the season along with the brotherhood with the group of guys on this team that was formed, it was definitely a great season.”

This past Saturday Batavia played number five Cary-Grove and were ready for a battle. The first quarter was controlled by Batavia since they ran out most of the clock with one offensive drive and just couldn’t finish at the end. The next quarter both teams heated up and Batavia scored one touchdown to  Cary’s two scores. And through the rest of the game the same score cycle continued. Cary 14 and Batavia 7. Sadly, the Bulldogs couldn’t pull through. This week, Cary will be playing number one Glenbard West who is undefeated and looks like the best team in semifinals for the 7A playoffs.

Batavia is in the Upstate Eight Conference and in that conference they held many of the  records. Some of which were most passing yards (2743 – Kyle Niemiec),  most tackles (95 – Colin Thurston),  most receiving yards (1144 – Canaan Coffey),  and most sacks (16.5 – Derek Nutley).

Though Batavia will be losing many starting seniors Batavia always seems find a way to make it to the playoffs. It’s even at the point where it’s hard for Coach Piron to make a schedule since nobody wants to play Batavia and lose by 20 points. We’ll see who’s brave enough to take on Batavia next year.