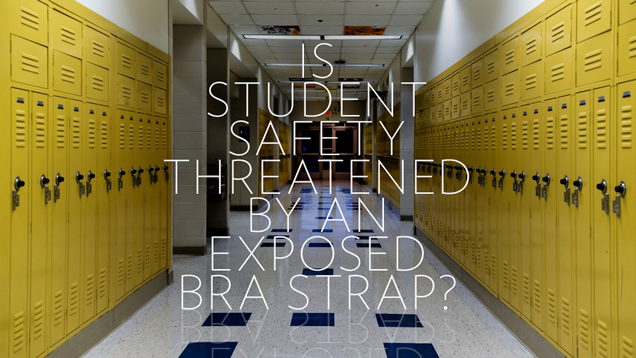 Girls are the ones that get the most attention when it comes to their clothes. Men are allowed to walk around with their shirts off with no repercussion but when girls show an inch of their stomach it’s made into a big deal. We are called names and sometimes even made to change. So tell me, what’s the big difference between a girl’s skin and a guy’s? There is none.

Here are a couple of the Batavia dress code rules I find to be on the ridiculous side:

These rules are meant for boys and girls but as you can infer it’s mostly going out to all the girls.  We are not allowed to wear things that form to our bodies. When the wrestling team wore their singlet to school last year you could see everything. No administrator said anything to them. If one of the gymnasts at Batavia decided to wear their leotard to school it would have been the subject that no one would shut up about.

Yes, the equality between boys and girls is not good but sometimes with the dress code it’s not even equally distributed between girls. You will see girls on the curvy side get dress coded more than the skinnier girls would. After getting dress coded for my shorts and tank top, Mrs. Reid emailed my parents about how inappropriate my outfit was and I got in trouble at home because my stomach was showing. The same day I saw girls with the same outfit on but they were left alone the whole day because they didn’t have any curves that could possibly “distract anyone.” I immediately emailed her about this issue and she said “ I can assure you that consistency with all school rules is a priority for us.” Is it really though?

For girls, all their cleavage has to be covered. Not all shirts do this for girls. There are v-necks and if girls want to show off what they got and if they feel comfortable then they should have the right to do so. Simple as that.

The last rule that gets to me is the no crop tops, spaghetti strap tops, or strapless shirts. This rule also mainly goes out to girls because you won’t really see guys wearing this. Anyway, no one is allowed to show their shoulders or stomach.

“I was wearing a shirt and a crop top the other day and got dress coded,” said, Batavia High School student, Devin Couturier, “Only about a centimeter of my stomach was showing. There was nothing wrong with my outfit.”

You’ll hear this from a lot of girls walking around the halls. The staff at this school really believes that it is inappropriate to show your skin. This is mostly because they believe that it is distracting to the students. There is no part of shoulders that is in any way distracting. If they’re worried about people pulling shirts up or down then that’s even more messed up. If you can’t control yourself enough around people with their shoulders or stomach showing then you shouldn’t be able to walk around in public.