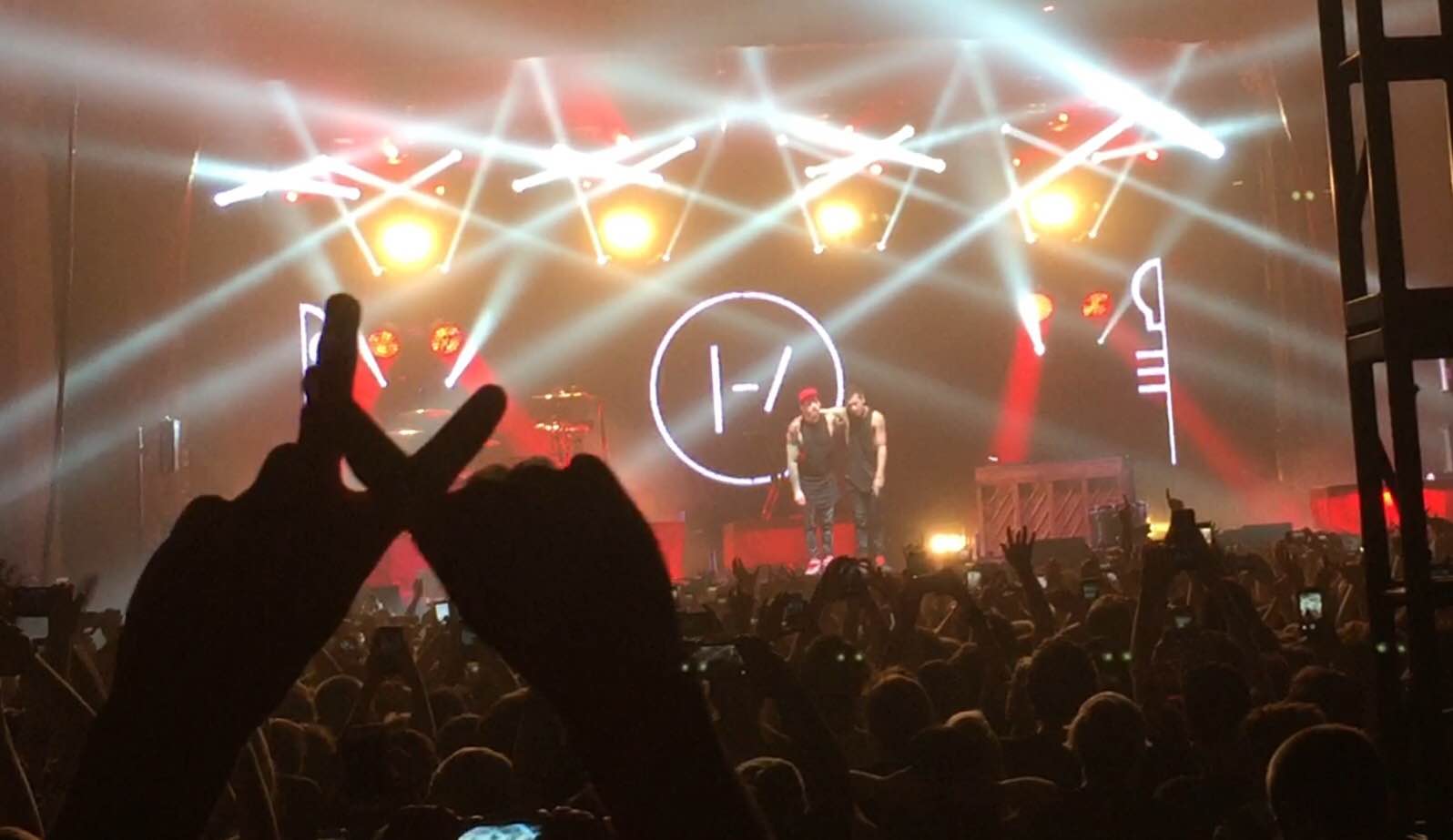 Tyler Joseph (right) and Josh Dun (left) get a final ovation from the crowd after playing their last song “Trees.” Twenty One Pilots played at the Aragon Ballroom in Chicago on December 3rd in front of a sold-out crowd on night 1 of 101 WKQX’s “The Nights We Stole Christmas.”

From the start of the first night of 101 WKQX’s “The Nights We Stole Christmas” at the Aragon Ballroom in Chicago, headliner musical duo Twenty One Pilots made it clear that Chicago has a special place in their hearts.

That is impressive, being that the band is from Columbus, Ohio.

Throughout the whole performance, Joseph and Josh Dun, the band’s drummer, gave the Chicago fans an unforgettable experience to wrap up 2015. The duo played a mix of songs from their first studio album Vessel and their new album Blurryface, which debuted at number one on the Billboard 200 chart earlier this year.

Longtime fans know all of the tricks that the band uses in many of its most popular songs, but newer fans are still amazed at the uniqueness and creativity the band brings to their performances.

“I’ve been going to concerts for 30 years and have never seen anything like this,” one fan said after seeing the band’s performance of “Holding On to You,” in which Dun does a backflip off of Joseph’s piano.

During the hit song “Car Radio,” older and newer fans alike were mesmerized when Joseph, wearing a black ski mask, made his way through the fans and climbed a 15-foot scaffold to be in the middle of the sold-out crowd. After singing the last line of the song, Joseph tore his mask off to a massive cheer from the nearly 3,000 fans.

The stunts didn’t end there however, as the crowd held up Dun and a drumset for the song “Ride,” and once again held them up as the duo both banged on drums for the finale, “Trees.” During “Lane Boy,” Joseph told the crowd to “get low,” and on the count of three, the fans rabidly jumped up and down. That wasn’t the only time it felt like the floor would cave in, as the fans similarly jumped up and down during “Guns For Hands.”

“The crowd really gets into the performance,” another fan said. “They [Twenty One Pilots] really include us in the show and we feel apart of it. We feel like we are up there on the stage with them.”

Joseph and Dun feel the same way towards the Chicago fans, with Joseph ending the concert saying their usual, “We’re Twenty One Pilots and so are you.”

Twenty One Pilots return to Chicago on June 5 next year as part of their newly announced 2016 “Emotional Roadshow” tour. They have already sold out Allstate Arena, as well as Madison Square Garden among others, all as the headlining band. Despite the growing popularity, however, one thing is for sure: Twenty One Pilots will always play for the fans.

Holding On to You

Tear in My Heart