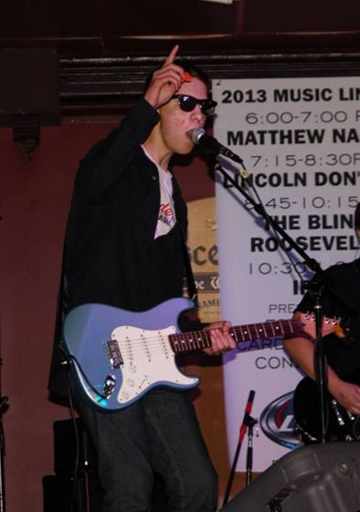 Dolphin noises precede a pulsating beat and some sort of whooshing, much like what you might hear as you explore the depths of the ocean, as Aidan Cada fingers the buttons of his Roland SP-404 sampler. His fellow band mate clicks away on his laptop and somehow transforms the sounds into an unrecognizable blur of blubs and bubbles.

“I’ve been playing music for about six years now,” Cada said. “I think of music sort of as a career, without the nine-to-five sort of feel.”

Cada plays in two bands, 12th and Evening Glow. 12th is more of an experimental recording project, whereas Evening Glow is a full band that plays a sort of Bowie-meets-Sonic Youth art rock. In spite of what these two very different music endeavors may suggest, Cada is a rather simple, laid back kind of guy.

When asked what is most important to him, his reply was, “Keeping myself occupied all the time. Not just sitting and thinking about what I could be doing.”

A day in the life of Aidan Cada consists of that of the average high school student. He spends half the day behind a desk, then returns home to listen to records, when he doesn’t have practice with either band. But don’t let this deceive you, as there is much more to the mind of this young fellow than that which may be one’s initial perception. And this is shown through his musical talent. He has co-produced and performed on multiple albums, upon which his contributions are arguably the most impressive of those involved. In addition to this, he’s gained minor local internet fame for his cover of the smash hit ‘Axel F’, and 12th and Evening Glow have both been chosen to open for indie star Alex G.

After he graduates, he plans to keep making music with friends, while remaining as independent as possible, as independence is something which he greatly values.

“I just like to have time to do what I want to do,” Cada said. “For example, I could just be that typical high schooler who smokes pot and goes to parties, but that’s just sort of idiotic and something people do to impress people. I want to be independent of those kind of people and those kinds of things.”

There is truly more than meets the eye with Aidan Cada. What the future holds for this young musician is unknown, but meek as he may be, the world is beginning to see a side of this quirky character which demands its attention.