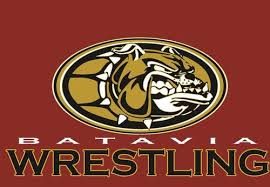 The match against Larkin was a perfect night to celebrate the seniors. Curtis Paton, a senior on the varsity team takes chances on and off the mat for the past four years here at BHS. Paton has a game plan everytime he goes on to the mat.

“I go out there and try to pin the kid, but overall try to score more points than my opponent,” Paton said.

Every school knows that the Batavia wrestling team is a force to be reckoned with. Larkin forfeited ten of their weight classes that night, only two out of five seniors actually got to wrestle.

But, even when most of the players were not wrestling, fans could tell that they wanted to be there and cheer on their teammates. When a wrestler was up, the room shrunk, all eyes were on two people with the same goal of winning. Paton is a true example of a comeback story. He comes back from his mistakes and becomes a stronger contender every season. He says that he gets it from his Dad.

“My dad is the one that I look up to because he is really tough on me and I don’t think I would be where I am today if he wasn’t like that. Saying that he didn’t make me who I am, I made myself the person I am today,” Paton said.

Paton represents Batavia with pleasure. He wears red and yellow with ease.

“I don’t have one specific thing that I am most proud of,” Paton said.  “My biggest achievement these past four years is representing Batavia

For many students on this team, wrestling is not just a sport for them. It has helped them in many hard times and helped them realize what is important.

“It has gotten me out of a lot of tough situations and has helped me mature as a person,” Paton said.

From the bleachers, looking down on all of the wrestlers of all classes, fans can tell that they are close. They care about each other by cheering them on and patting them on the back when they return to the sidelines. They bond over the sport of wrestling. It was a sentimental night that many people will remember forever. This was the senior’s night to shine and that’s exactly what they did.