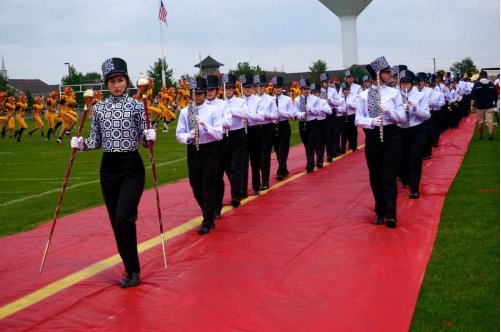 There are many pros and cons to marching band, and with the help of some band members, The Spectator has gathered them all in one place to help students decide if marching band is an activity they should be a part of.

On the positive side, the first thing that comes to mind is music. The benefits of being a musician are well documented; it can help with memory, increase SAT scores, refine comprehension skills, and much more. It also looks great on a college application.

In addition to music, marching band is also a good way for those who normally don’t like to exercise to do so. As a more musically inclined physical activity, students who generally are averse to exercise are often more comfortable in marching band. Third, there is a sense of community and family involved in the activity.

“With the flute section this year, we started off kind of awkwardly friendly to each other, but by the end we were teaching each other threats in sign language,” said freshman flutist Kristin Wolford jokingly.

Competitions are also a huge part of marching band. Though the thought of competing may sound nerve-wracking, there’s no cause for dismay according to current members.

“You may feel nervous about the performance beforehand, up until the drum major conducts the last downbeat of the count off, but at the first beat of the show you feel invincible,” Wolford said.

Competitions may lead the marching band to different parts of Illinois regularly, as well as larger adventures like Hawaii on occasion. Additionally, time management is a skill that’s definitely taught and used.

On the downside, as everyone in the band can agree, it’s a lot of work. Physically, it can be difficult, due to the marching while carrying an instrument while in the hot sun for long hours across several months, including the summer months. There’s also plenty of memorization to be done within a short period of time. Marching band members have to memorize their dots (places on the field), their music, and the visuals very quickly to be able to thoroughly practice it before a competition.

Besides memorization, with regards to the social aspect, there’s going to be some trouble there just like in any other sport or club.

“As with anything, there are days where everyone gets frustrated and no one wants to be there. There’s drama with the band members, although it’s usually stupid stuff,” said clarinet player Joy Mazur.

Marching band is also very time-consuming. Competitions can span the entire day, with long bus rides in the morning and at night. Sometimes, it can be too difficult for people, especially those who are uncoordinated, have difficulty keeping a steady beat, or have disabilities or breathing problems like asthma.

That being said, the members interviewed rush to defend marching band. They point out that schedule conflicts are a problem with any other sport or club, and that memorizing isn’t so bad.

“Doing repetition and memorization is really tedious too, but there are lots of ways to make it fun,” Wolford was quick to say.

The bottom line here is that marching band is a commitment that may not be for everyone, but those who join bond together and love what they do.

“I would definitely recommend marching band to other people! Though it was tiring and could get kind of stressful, the good definitely outweighed the bad, and all the work we do is so worth it,” Wolford said.

In conclusion, all the members interviewed can agree that marching band is something that they largely value in their lives and would strongly advise others to do. The interviewees all argued that the benefits heavily outweighed any detriment.

“There are pros and cons, but overall it’s a thing that most people come away proud of, and something that we’ll miss until next season,” Mazur said.