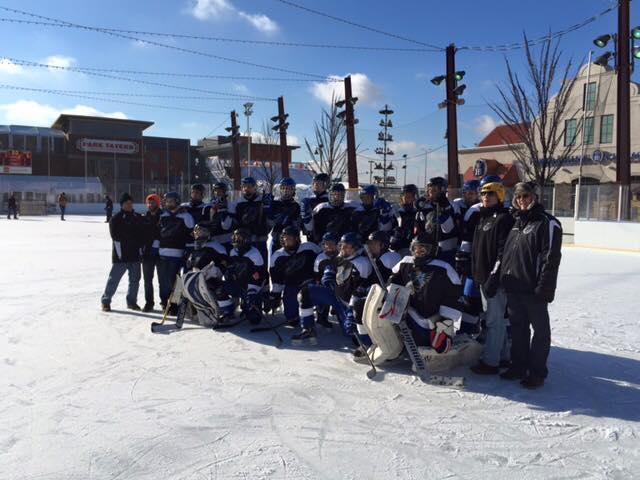 On Saturday, January 16, 2016, the varsity high school hockey team, the Fox Valley Hawks, beat the Cobras 5-1 at BM Financial Park in Rosemont, Ill. This ice arena is outdoors as opposed to indoors. This was also an exhibition game, meaning it doesn’t count in the standings of the league.

Mikkel Knutson said, “When I tell people I play on our high school hockey team they’re so surprised because they didn’t know we even had a hockey team.” Batavia High School’s hockey team isn’t called the “Bulldogs” like every other sports team. They are called the Fox Valley Hawks. This season their record is 13-2-2.

In the first period of the game, goalie Aaron Karkos saved more than 20 shots. The Fox Valley Hawks scored the first goal of the game with 16:20 left in the period. Brock Williams scored the goal, with assists from Tyler Campise and Morgan York.

The second period came with some changes with the Hawks switching out Karkos in favor of William Lesswing in goal. Tyler Campise scored the game’s second goal with 19:49 left in the period to put the Hawks up 2-0, with assists from Morgan York and Brock Williams.

There are five high schools that fall within this team, Batavia, Geneva, Kaneland, St Charles North and St Charles East. The Fox Valley Hawks are currently in third place in Illinois High School Hockey League Hayes – Suburb Division with 28 points as of January 21st, 2016. Being a combined team there are people from many different schools, but there is a grand total of three Bulldogs on the varsity team out of twenty players – fourth-year senior goalie Aaron Karkos, second-year senior defenseman Mikkel Knutson, and first-year sophomore defenseman Chris Monroe.

Each of the Batavia Bulldogs have been playing for ten or more years on mostly indoor rinks, but playing on an outdoor rink is significantly different compared to playing indoors. Karkos, Knutson and Monroe all agreed that the sun being in your eyes was a challenge.

“From a goalie’s perspective it was harder to see the crease,” Karkos said.

A goalie’s point of view on the challenges playing outdoors can differ from a defender’s point of view, since they serve a different purpose on the team.

“It was colder, the ice was harder which made it more difficult to skate,” Knutson said. “There was more snow on the ice that you had to force the puck through.” Monroe agreed with Knutson on the ice itself being different but he claimed that he grew accustomed to it.

Throughout the game there were penalties not called for punches being thrown. There was one penalty called on Josh Gadow of the Fox Valley Hawks for retaliating at a Cobra by punching him.

Along with many of the other penalties not called a Batavia Bulldog got pushed without anyone noticing.

“I got hit in the face,” Knutson said.  “I figured it was okay. We were winning on the scoreboard so it didn’t matter what they did on the ice.”

Coach Phil Gabrielsen, the head coach of the Fox Valley Hawks, said that hockey can get out of hand and their team has the least penalties in their league for a reason. He does not promote that kind of behavior and the kids who threw the punches were talked to.

Seniors not being eligible to play spring season with the Hawks means this is Karkos’ and Knutson’s last season playing high school hockey. Karkos is definitely sad to be leaving the Hawks since he’s played with some of the same guys for four years.

“I don’t know, it’s kind of serene for me. It’s a bunch of great guys and it’s hard to leave them,” Knutson said.

It isn’t Monroe’s time to leave the team yet being only a sophomore, but he is sad to see the seniors go. Although he will definitely stay with the Hawks for the years to come. He hopes that more players from Batavia will join the team so he isn’t the only one left.