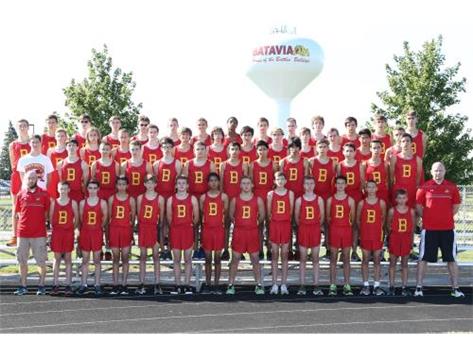 As the track season is right around the corner, the distance team is having early practices to have a fantastic start to the season. They are working on specific workout plans written by their coach to get ready for the season. They also take precautions on their own outside of practice. The distance team plans to do a lot more than just have an amazing season, the runners attempt to break personal records  in the 400m- 3200m and coaches strive to break team records for the mile and 800m.

Track coach Bronco Meeks always has high expectations for the team and this year is no different. He encourages all his runners to continue to run and practice important habits on and off the track.

¨Varsity distance is running about 6-7 miles a day while the newer guys are running 5-6 miles,¨ said track coach Bronco Meeks.

Meeks is fully committed in seeing the team run. The feeling is mutual, as these guys run through the tough winter weather, these runners run on a full schedule most the time.

¨Upperclassmen who have been running for a long time get every other Sunday off,” Meeks said. “The younger guys get every Sunday off.¨ The runners are on a continuous schedule that does not change until the end of the season.

¨There is pretty good talent for the freshmen overall. One guy that I’m looking out to do (well) is Ben Barranco,¨ Meeks said.

Meeks wants this freshman team to have a successful season, but he also needs help from the upperclassmen to get those freshmen there. Meeks has given huge responsibilities to those upperclassmen.

¨They are responsible for getting the guys together and running the practice plans that I give them,¨ Meeks said.

But also as a team they have a lot more responsibilities between the individual runners.

These distance runners are some of the most versatile runners on the track team. Sometimes running all this mileage can affect the speed of a runner. But Meeks adjusts the practices to the type of runner.

¨Some of the guys that are more of the lower distance guys get their mileage adjusted and we send them to work on speed with the sprinters,” Meeks said.

Meeks believes in his team. He has set some tough goals, like breaking the mile barrier for most runners, winning conference and other important meets, but nothing that is out of reach for this team.  Although there are several individual goals that Meeks creates to fit the runner, there is one that he want to reach as a team.

¨I would like to see the guys break the record for the most runners breaking the sub five barrier in a season,¨ Meeks said.

There is a lot that Coach Meeks has planned for the end of the season. He allows his runners to have the responsibility needed to make great captains and believes that his runners can accomplish many goals as a team and as individual runners. One of the senior runners, Michael Bock, has plans of his own to continue to break his personal records and have milestone accomplishments for his last year.

Bock is also very passionate to running as all the other guys on the team. He has been running just about all year long and says he averages six to eight daily miles.

Bock is one of those very versatile runners. His freshman year of track and field he was a fulltime sprinter. It was not until his sophomore year he decided to run distance. He has noticed the very huge differences between distance running and sprinting.

Goals are very important to the whole distance team. For Bock it is no different. He has very high goals that he is striving for in the offseason, like a 1:52 in the 800-meter, a 4:27 mile, and a state championship.

¨Everyday is crucial, one day missed can make the other days a lot tougher,¨ Bock said.