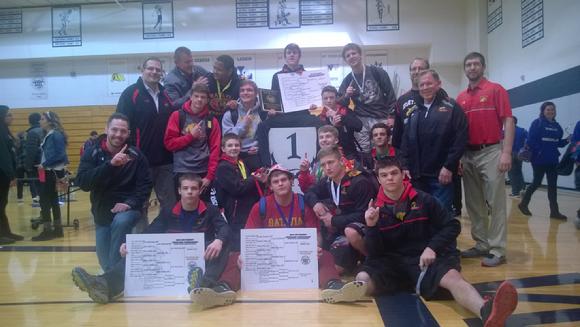 Many sports require strength and endurance but none like wrestling.  Wrestling is one of the toughest sports that anyone can play and Batavia’s wrestling team is one of the best around. Batavia’s wrestling team is having a very successful 2015-16 season due to all their wins against opposing schools, especially after the Bulldogs knocked St. Charles North off the top of the Upstate Eight Conference throne on Sat., Jan. 23 to win the conference title.

Batavia continues to smash their competition one-by-one. Batavia’s varsity team is led by incredible wrestlers such as Dylan Uzumecki, Derek Nutley, and two freshmen who stepped up this to varsity year, Justin Major and Andy Posledni. The entire Bulldog wrestling program was full of hard-working, dedicated athletes at all levels and that is why they were so consistent in their meets and tournaments. This season was fantastic for the Bulldogs wrestling team, They were able to crush all their opponents in tournaments finishing nothing shorter than 2nd and also winning another 15 meets. They were able to come through as a team to achieve greatness together as one.

“When everyone comes through like they did today,” Said Dylan Uzumecki, “this is where wrestling truly is a team sport.”

The wrestling team was made up of some dedicated wrestlers, the kinds of people that are proud to say they can achieve something of such great magnitude such as a season of wrestling. Although the wrestlers are dedicated and hardworking, they couldn’t have done what they did without their coaching staff. The Batavia wrestling team was coached by Scott Bayer, Greg Schroeder, Tom Arlis,  Farwell, John Canfield. These coaches were one of the biggest parts of Batavia’s wrestling success due to the fact that they coached the team to wrestle better as coaches but pushed them to succeed as mentors. Day in and day out the coaches and players were in the wrestling room putting in the hard work and pushing their bodies to the limits so that they can be victorious in future meets and tournaments

“We won the division last year,” Coach Bayer said, “but this is so much better because it was a true team effort that saw all 14 guys medal, including three individual titles, to help us get past the defending and four-time champs.”

Batavia is off to the IHSA Regionals on February 6 where they will once again fight for that top position. They will continue to put in the effort that they have been putting in all season with their 6 am practices before school and another 3 pm practice after school just so that they can say they took home another win for their town. Currently the Bulldogs are 15-12 after taking first in the Upstate Eight Conference tournament and second in the Batavia and Glenbrook South tournament. Batavia as a town has faith in what the team can accomplish.