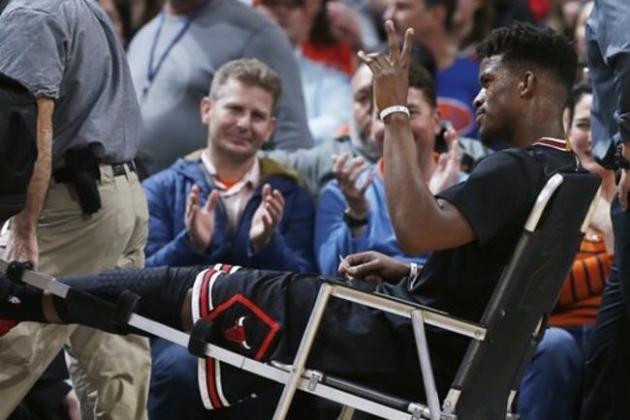 The last several seasons, the Chicago Bulls have been one step away from the NBA Finals. When they drafted him five years ago, the Bulls thought they found their missing piece in Jimmy Butler as he has not only stepped into the spotlight, but has become the Bulls’ new superstar. When it finally seemed that the Bulls were finally getting some luck to break their way, injuries started to plague the whole team. This is something that the Bulls have dealt with for so long. It seems like every year, Derrick Rose has a season ending injury. Although Butler will have to sit out three or three weeks due to a knee injury, the Bulls have already shown how important Butler’s role is on the team.

Butler´s absence on the court has taken a toll on the Bulls. They have lost four games straight, with their opponents outscoring them 438-393. When Butler went out with the injury, the Bulls lost by by 5 points.  But their last game against the Atlanta Hawks was a 23-point loss . Butler has averaged 22.4 points per game (ppg), while the Bulls have averaged 102 ppg, meaning that Butler is accounting for about 25 per of the team’s points. Last month the Bulls went on a six-game winning streak in which four of the games Butler lead in points. Not too long after that win streak Butler scored 53 points against the 76ers.

Butler is expected to be back on the court in two or three weeks from when the injury occurred. But until then the Bulls will have to do without him against some of the East’s toughest teams. On Feb. 18, the Bulls will have to go against the toughest team in the East, the Cavaliers with a chance that Butler will not be on the court. Not long ago, the Bulls were second in the Eastern Conference. But with Butler hurt they have dropped to the seventh seed,  which will make the rest of the season tough to overcome for the Chicago Bulls.