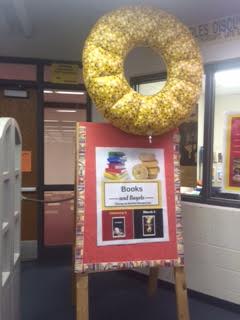 On Thurs., Feb. 4, the Batavia High School book club discussion was held in the library, where  three members talked about a couple of books and authors, including Perfect Chemistry by Simone Elkeles.

“It was created because book clubs are fun,” Miller said, “and students read a lot and enjoy talking about what they have read.”

Miller also mentioned that books and bagels is enjoyable to both the students and the staff.

“It is fun for us as well – the teachers enjoy sharing their enthusiasm for books and reading and want to hear what the students are interested in,” Miller said.

During the meeting, the book Perfect Chemistry and its author Simone Elkeles were discussed, as well as potential future novels.

The mood of the room was very laid-back and informal, and the members spoke freely about their opinions on the book they read this month, Perfect Chemistry. The author is scheduled to visit in April, which gives the members the opportunity to ask her questions about the book.

“I am excited about the author coming to the school,” said freshman Lily Rousseau. “I really like it when I can meet an author and find out why they wrote a book [or] what was their inspiration.”

The members also discussed books they could read in the future. Among these were Orphan Train, Between Shades of Gray, and The 5th Wave. They confirmed The 5th Wave as their next book, but still looked at other novels. They especially were interested in the 2016 Abe Lincoln Award Review books because if students read at least four of these books, they can vote and receive a free lunch.

The members of books and bagels discussed the books on the list, sharing their opinions on the books that they had read. Mr. Russo championed for Orphan Train, and Miller suggested Between Shades of Gray in addition to Orphan Train.

They also mentioned books that they personally didn’t like, such as Butter, about a boy who wants to film himself eating himself to death. Mr. Russo was “weirded out” by this premise.

The wide range of books discussed in this meeting is one of the club’s strong points according to Rousseau.

“My favorite part of books and bagels is that you don’t necessarily have to read the book of the month.” Rousseau said. “If you didn’t have time, you can still come and have an intelligent conversation about books.”
The meeting concluded with a check-in to make sure everyone was signed up for Google Classroom, and an encouragement to take a bagel or a scone before leaving.