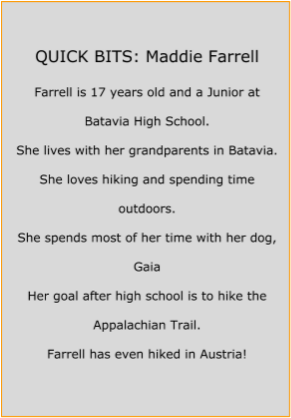 Unlike most 17 year olds, junior Maddie Farrell can’t wait to go home and see her family. The average high school junior, however, see their families every day. Farrell, on the other hand, lives 900 miles away from her parents and her brothers.

Most teenagers would eagerly jump on the opportunity to live away from their parents, with their only discipline being little restraint from their grandparents. Maddie Farrell, however, knows that living virtually alone is not all it’s cracked up to be. The freedom is an upside, but there are many negative aspects including frequent travelling, having to mature incredibly fast, and having to gain a sense of self sustenance that most people don’t possess until much later in life, according to Farrell.

When Maddie’s parents told her they were moving to Connecticut after her sophomore year because of a new job opportunity, she couldn’t believe the news and was left wide-eyed. She had friends in Batavia. She had a boyfriend. She had a life.

“I cried. I was so sad and so mad,” said Farrell. “I got really angry at my parents and I immediately thought ‘No, I’m not moving.’”

After a long discussion with the entire family, it was decided that Maddie would stay with her grandparents in Illinois to finish out her two years of high school. Maddie was left in disbelief, she didn’t think that she would be living apart from her parents from August through May until she graduated. The decision was made quickly, and Maddie knew what would happen if she stayed with her grandparents, but she also understood her feelings towards the Connecticut school she would have been attending.

“I thought about it and I was like ‘I would have a really hard time fitting in at this small school I would have to go to,’ it only has 300 kids who all know each other already and I would have been the new girl,” Farrell said. “But now I’m really regretting my decision.”

Maddie’s grandparents allow her lots of freedom, but sometimes this independence isn’t all it has cracked up to be. Maddie explains that she has to do almost everything for herself, she doesn’t have anyone to tell her to do her homework, or to go to bed at a reasonable hour. She often has to be self sufficient, and do everything for herself. She doesn’t have her parents watching her every move, but Farrell knows how to handle this responsibility.

“She handles her independance very well,” said Joe Posledni, Farrell’s boyfriend. “She does everything she needs to and functions perfectly.”

Although Farrell may not live with her parents, she constantly talks to them. Whenever her phone lights up from receiving a message, Farrell’s face lights up as well, and she promptly unlocks her phone to respond to her mom’s text, snapchat, or phone call. Farrell also discusses how her relationship with her parents has been strengthened by the distance between them.

“It made me really good friends with my parents actually,” Farrell said. “It’s kind of weird, but I tell my parents everything now and I skype them every day. I actually talk to them more now than I did when I actually lived with them. It kind of makes me regret doing that.”

Throughout the day, Farrell texts her parents and communicates with them through snapchat, and other forms of quick contact. When she is at her grandparent’s house however, the methods of communications are different.

“I skype with them a lot. Skype is my new best friend. And I call them all the time. Actually when I was driving over here I was talking to my mom on the phone.” Farrell laughed.

A tough aspect of the distance from Farrell and her family is the travel between them. However, Farrell isn’t a nervous flyer anymore. On her frequent flights to and from Connecticut, Farrell has seen it all, from planes nearly tipping on their sides during a storm, to several of the passengers in the plane experiencing airsickness, Farrell has the flight experience, and the lack of nerves, of a flight attendant.

“They either come to visit me or I go to them once a month-ish but sometimes it’s either a month and a half or two months,” Farrell said. “During cross country season I can’t go and visit them so they have to come visit me.”

The distance has been hard on Maddie. Her friends and those close to her have noticed that she is a lot lonelier than she was before the move, and she does experience bouts of sadness. However, Farrell has a large support network and many friends who care about her and do everything in their power to try and make her feel like she’s not alone here. Celia Millane, a good friend of Farrell’s, sums up the overall feelings surrounding Maddie.

“Maddie is an amazing friend that you can go to with anything. I trust her a lot more than most people,” said Millane. “I’m glad she didn’t move because I would miss her so much.”

Farrell loves nature and hiking, and the geography of Connecticut is perfect for her adventurous personality. She even plans to graduate high school early and to hike the Appalachian Trail alone from Maine to Georgia, and eventually go to college closer to her parents. When asked if she had any other comments, Farrell gave a short, yet powerful response.

“Value your parents,” said Farrell. “They’re actually pretty great once you get to know them.”