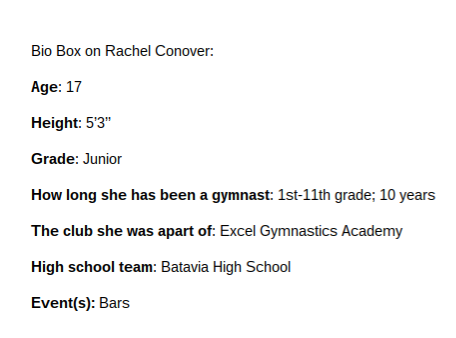 As a child, being a part of a sports team can be very exciting. The heartbreaking feeling of missing a single practice is traumatizing for some. Imagine all of the time, effort, and determination that was put into that single sport, then finding out that it was the cause of a serious injury.

Roughly three years ago, Rachel Conover was diagnosed with spondylolisthesis, a birth defect. Her spinal cord and nerves were being squeezed together by the broken vertebrae that she also had. This was called a spinal fusion. In her eighth-grade year of junior high school, surgery was scheduled to help relieve the excruciating back pain that shot up her spine, a pain she dealt with on a daily basis. About a year later, Conover began to continue her gymnastics career and now is a varsity gymnast for Batavia High School.

“I was surprised when I first found out about Rachel’s injury because she had been complaining about her back for some time before we decided to go see a doctor and figure out what the problem was,” said Tim Conover, Conover’s brother. “I had felt a sort of worry because of the seriousness of her condition and what could’ve happened if surgery had gone bad.”

Conover began to notice she had back pain in seventh grade. She experienced pain at home, school, and especially at gymnastics. Her coach at the time, Katie Novorolsky, noticed the severity of her pain during practice, along with a small change in her work ethic.

Conover began to dread the thought of going to another 3 hour practice at the gym. There was more sitting throughout each practice than there was working, and after each skill, her hands became glued to her lower back as if she was afraid to move another muscle. Since gymnastics is such an impactful sport on the human body, a majority of the involved stress was drawn to her back and this was what caused her pain to flare up. After about six months, Conover and her parents decided to see an orthopedic doctor.

After undergoing an X-ray, MRI, and CAT scan, Conover and her family received the results. She was diagnosed with spondylolisthesis and would need surgery. The thought of surgery frightened her and sweat chilled her palms.

Conover’s surgery took place on Sept. 25, 2012, at the Children’s Hospital in Chicago. Two metal rods were put into her back in order to help relieve the agonizing pain caused by the condition, spondylolisthesis.

“I never would have thought she would have to have surgery and be out of gymnastics for so long,” said Rylin Hoffner, teammate to Conover. “I thought she was just going to take time off for awhile and I was very surprised when I found out that she had to have metal rods put into her back. It was definitely a lot more serious than I expected!”

After many long days, weeks, and months of recovery, Conover began to receive full function of her body again – for example, walking and traveling up and down stairs, on her own. Part of the recovery process was taking an extended period of time off of most physical activity, including gymnastics.

“I was sad that she wasn’t going to be able to do gymnastics with me anymore, at least for awhile,” said teammate and close friend, Amanda Dian.

Although this recovery was hard, Conover managed to push through many obstacles that occurred during the overall process.

Once Conover was cleared by her doctor to participate in the regular physical activities that took place in her life before surgery, she slowly began to do gymnastics again.

“Not having her at practice was weird,” said Stephanie Hall, a student at ACC High School and Conover’s teammate at the time.

Since the recovery, Conover has continued to do gymnastics. She has been a part of the Batavia High School gymnastics team since the beginning of her freshman year of high school and will continue to do this sport through her senior year.

Due to the re-occurring pain, Conover now focuses on one event in gymnastics. She does bars, and can’t wait for her senior year on the Batavia High School gymnastics team.

Even after the many years that have gone by, Conover still experiences back pain.

“The two rods in my back stick out a little and if something hits that certain area, then it hurts,” said Conover. “For example, if I lay on my back.”