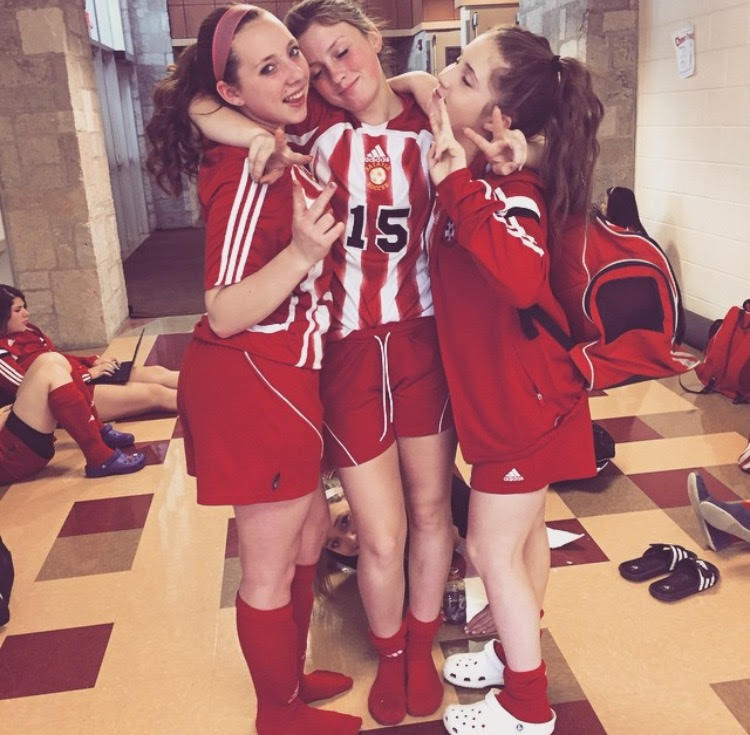 Being in highschool, trying to maintain a social life, and keeping up good grades isn’t easy, especially when students add on a job or clubs and sports. But Francesca Hoffman seems to know the exact secret formula on how to balance all three, while maintaining all As and a couple Bs.

Hoffman also known as ‘Chess’, a junior at Batavia High School is in all AP and honors classes. Besides her high level in education, Hoffman has also been on the Batavia girl’s JV soccer team for the past two years. Because of a recent ACL injury during club season, Hoffman will no longer be able to participate in the high school season this spring. Instead she has broadened her horizons by joining indoor track and Key Club.

Growing up, Francesca has always been a part of sports and activities to keep her busy. At one point in her grade school life she was doing soccer, horseback riding, girl scouts and basketball all at the same time.

“From a very young age, sports and academics have been parallel in Francesca’s life,” said Cindy Hoffman, Francesca’s mother. “As she excels at her sports she also excels in the classroom.”

Her mother feels that being apart of a team from such a young age has helped Francesca grow stronger in her education and other useful qualities in life.

“Perhaps the sports build self-confidence, communication and individual challenges, which may contribute to her success in the classroom or vice versa,” Cindy said.

Francesca has been described by her high school coach, Christopher Payton as “hard working on the field and very competitive.”

Not only can she be described as a hard working  and focused high school student, but also as energetic, responsible, outgoing, motivated, and generally someone that is fun to be around, according to those around her.

“Chess has a really positive attitude towards the game, and can bring everyone’s mood up no matter what,” said Carly Simonian, a club teammate of Hoffman’s. ”Even when sitting on the bench, she is still cheering for everyone out on the field, giving us positive energy and motivation.”

Running down the grass field in the crisp spring air, with all the parents and family members cheering for the winning goal, just might not be a realistic vision this spring. Unfortunately, sitting on the bench might be the only thing Hoffman will be doing this coming up season.  Francesca’s recent torn ACL may make team manager her only option if she wants to remain a part of the BHS soccer team, an incident that occurred when switching to Campton United and playing up in the U-18 division.

“It saddens me because I really enjoyed being able to play with a lot of my friends from school,” said Francesca, when asked about her injury. “The spring season really helps you build bonds with girls that you usually wouldn’t be able to make during club. But hopefully I will be able to be a manager, so I can build onto those bonds, and see the girls play.”

Hoffman has join the school’s track team to keep her busy and well in shape, while her ACL fully recovers.

“At first I wasn’t able to do anything sports related, run, kick,” Francesca said. “But now that I am close to four months recovered, I think track will be the better option because of the less physical activity against other players, like you have in soccer.”

But her responsible and hardworking habits don’t stop on the field. In the classroom Francesca is always contributing to class and involved in class activities.

“In general I would describe Chess as a “work hard, play hard” kind of person.  She is cognizant of her performance in school,” said Kevin Jensen, Francesca’s pre-calc with trig honors teacher. “She is responsible and tries to understand material in class, but she also likes to try to have fun in class.”

Every night when Hoffman gets home from a long day of school and practice, she doesn’t just hop right into her bed for some beauty sleep. Instead, she pulls up her backpack beside her and pulls out her daily dose of homework. On average every school night Francesca puts aside about two hours of study and homework time.

Hoffman soaks up information with her brain like a sponge does with water.

“Francesca moves at her own rate and absorbs information quickly and accurately, propelling her at a faster rate both on and off the field,” Cindy said.