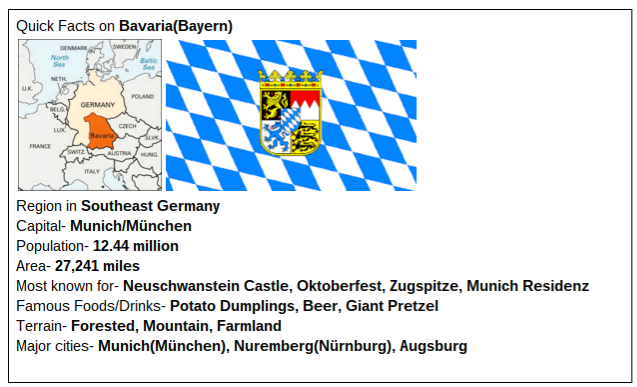 Bavaria is a breathtaking region in southeast Germany, and to visitors, there are a few amazing places to go. I had the advantage of visiting these cultural places including Munich, Garmisch-Partenkirchen, and Oberammergau. Inside this amazing landscape lies small villages, giant castles, large cities, farmland, and even mountains. This region has so much to offer, and I had the once-in-a-lifetime opportunity to visit those amazing places with my grandma and uncle in a place I had always wanted to go, Germany.

My Thanksgiving break consisted of a astonishing to a country well known for its food and drinks, castles, cities, soccer teams and culture. But when I visited, one place stuck out from the rest for me, and that place, was called Bavaria, a place of mountains, towns, castles and more.

Bavaria’s largest city and capital is the well-known city of Munich. Once we first reached this city full of history, we rented a rental car to get to the hotel. The thrill of being in Europe hit me. I quickly threw my bags into the room and wanted to explore this vibrant city. We walked around the city center and yet again, I was in awe.

¨Of the sights we were able to visit, I liked Marienplatz, the city square, surrounded by impressive, historical buildings like the old and new city halls,¨ said visitor Helga Wilk.

My favorite place in Munich was the BMW Welt. The BMW Welt (BMW World) is a museum. In the museum, one can see famous BMW cars from present day, all the way back to 1916, when BMW started. It also includes a driving simulator in which one can drive in an old race car. Right across the street includes the famous Olympiapark München where the 1972 Summer Olympics were held.

The next stop on the list was a large town in southern Bavaria, Garmisch-Partenkirchen. This is a town that has ¨ Impressive historic facades, lovingly painted houses and charming inhabitants that give the town an open atmosphere and a sense of joie de vivre, which is touching, moving and unforgettable,¨ according to Bavaria.us. The town gives visitors a true sense of the German culture .  The city lies in a valley, a mountain away from the country of Austria.

The next thing that I did is probably the most amazing thing I have ever done – riding a gondola to the ¨Top of Germany¨, Zugspitze, the tallest mountain in Germany. Once up to the top, mountains covered in snow were everywhere in all directions. The view had valleys and peaks that seemed endless, all throughout. To the south, a massive valley with low fog was seen (most likely the city of Innsbruck, Austria).

And I was too. We were up there for what seemed to be hours. Once down from Zugspitze, we wandered through the town, shopping and eating schnitzel (German breaded meat), bratwurst (German sausage), and spätlze (German noodles).

After spending a few nights in Garmisch-Partenkirchen, two towns were left for our Bavarian part of the trip, including famous Rothenburg, and Oberammergau, home of the famous Neuschwanstein Castle. First was Rothenburg (ob der Tauber). Rothenburg ob der Tauber has ¨Narrow towers and imposing ramparts; winding alleyways and picturesque oriels; half-timbered houses lovingly decorated with window boxes and hanging baskets,¨ according to tourismus.rothenburg.de. The town is rich in history and art.

After venturing around the town for a while, our final Bavarian stop was the well known Schloss Neuschwanstein (Neuschwanstein Castle). The fog was low that day; we couldn’t see much of the outside, as it was foggy, but we could see the massive white center of the castle. On the long journey up the path to the castle, visitors can see the impressive, but smaller Hohenschwangau Castle. The castle Neuschwanstein was built by King Ludwig II of Bavaria, who was king in the late 1800s, for the king’s parents.

Once inside the castle, the massive marble ceilings were breathtaking. The first level’s story was carpeted throughout, with giant paintings, high ceilings of wood and marble, with arches stretching throughout the rooms. In some rooms, giant gold chandeliers with dozens of candles on each filled the room. Everywhere you looked, some work of art was on a wall, ceiling, or floor throughout.

The adventure through Germany was not the end for us, we visited family and more cities and regions like Baden-Würrtenburg, Hessen and Rheinland-Pfalz, including cities  Frankfurt Am Main, Stuttgart, Mannheim and more. Germany is an amazing place, rich in history, art and culture. If ever traveling to Europe, one should definitely visit Germany, especially Bavaria for its mountains, towns, castles and more. This region has it all.