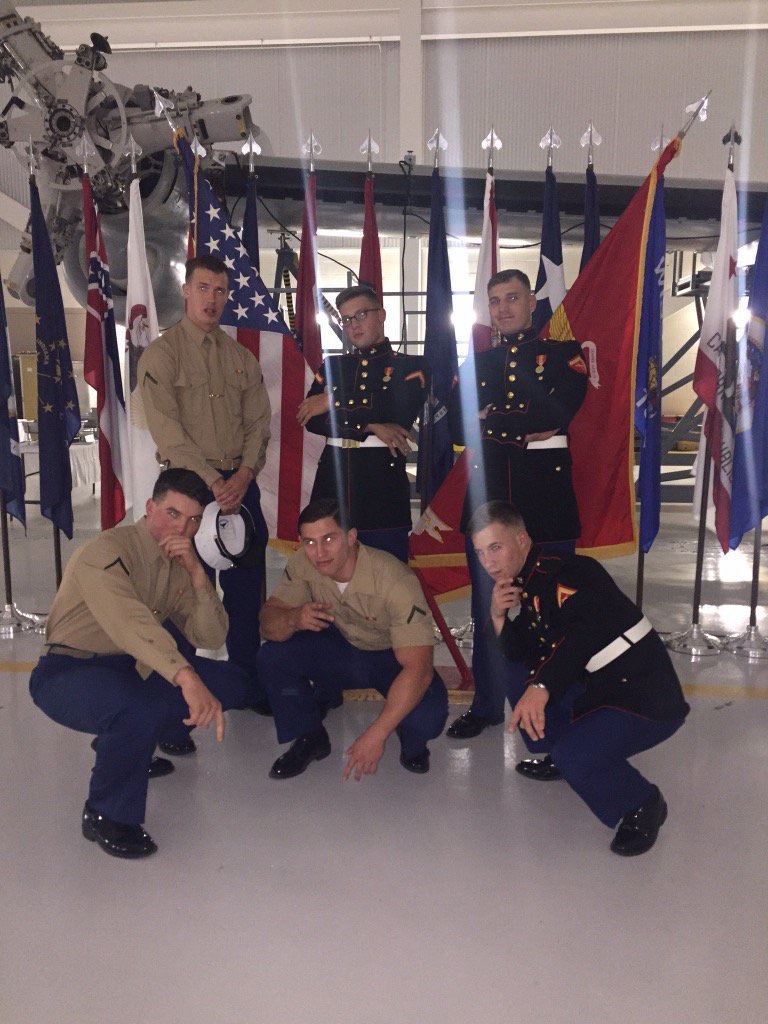 “The United States Marine Corps,. a branch of the United States armed forces trained for land, sea, and aerial combat, is responsible for amphibious operations: a separate service within the Department of the Navy.”

You are not an official Marine until you have surpassed the basics of bootcamp. Bootcamp is 13 weeks of learning a lot of the basics that you need to know to be a general Marine.

“Being a marine is something that not many people can do,” said Lance Corporal John Buchas. “For me, bootcamp wasn’t hard; obviously, some parts were harder than others. I’d do it again. It definitely pushed me to my limits. I love what I’m doing, and I’m working towards the position of Corporal.”

A typical day for a Marine starts around 04:30, by making their bed to perfection and cleaning their room spotless. As they make their way to the bathroom, they shave every day with no exceptions.

Buchas has always had pretty good hygiene. From keeping his hair nice, to whitening his teeth, and making sure his clothes fit nicely. Now, more than ever, he seems to wear more tight fitting clothes to show off his muscles. Each marine has their own way of getting ready. Although it’s basically all the same, it just takes time to figure out the right schedule for them.

As a helicopter mechanic, pre-operational checks of every piece of equipment begins. They begin what’s called ATAF, all tools accounted for. This ensures that every tool on the floor is either being used or not being used and where it’s supposed to be. If this doesn’t happen, any FOD can get jammed in a spot in the helicopter while in the air and completely stop working.

In order to make sure every tool is accounted for, every Marine is assigned to this job, or squadron, is spread out on the flight line. They begin the FOD walk. FOD is all the little tools, nuts, bolts, and rocks around the helicopters. If a piece of FOD gets in the aircraft it can do the same as a tool, completely shut down the aircraft while flying and kill everyone on board.

Buchas works on the largest helicopter aircraft in the existence of the US military, the CH53E Super Stallion Helicopter. They all help to fix any and all problems with the aircraft. From tiny holes in the panels outside the aircraft to complete failure of the hydraulic system, the overall job is to make sure the squadron has as many helicopters ready to fly safely as possible at all times.

During everyone’s time in the Marines, they never stop learning, no matter what their job is. They can be a helicopter mechanic and learn how to assemble a part of the aircraft. Or they can be a drill sergeant and learn something new about their recruits each and everyday.

Bootcamp tests all the skills they need for the Marines. Some don’t even make it through bootcamp.

“There were a couple of guys that I met at bootcamp that had to leave early because they couldn’t take it. There was even a guy that left because his dad had died,” Buchas said.

“If you are a good Marine like me,” Buchas said, “you know that height and weight standards and physical fitness are a part of your job as a Marine.”

Buchas normally goes to the gym for 2.5-3 hours a day. They work on the usual weightlifting and cardio to prepare for the fitness tests they take to ensure they are fit enough for their job. They do everything on a much higher scale. This means they lift more weight and run faster for longer. After roughly a 12-hour work day and a 3-hour gym day it’s about 10 PM. This is the time to relax and sleep and get ready for the next day where they do the same thing all over again.

“I do all this not only because I am being told to, but because I want to. we were all given the option of what job we wanted. We were all put through the same training in bootcamp. It was up to the soldier to actually put forth the effort if he wanted to do well. If they do it just to get through it, they will not be in the same position as the person who puts in more of what they are asked to do and work for a higher rank,” Buchas said.

Buchas is doing all that he can to get to that higher rank. He is working out on a daily basis, climbing mountains on his days off for endurance, and putting in everything he has at work to prove to his captain he deserves to climb up to the next possible rank.