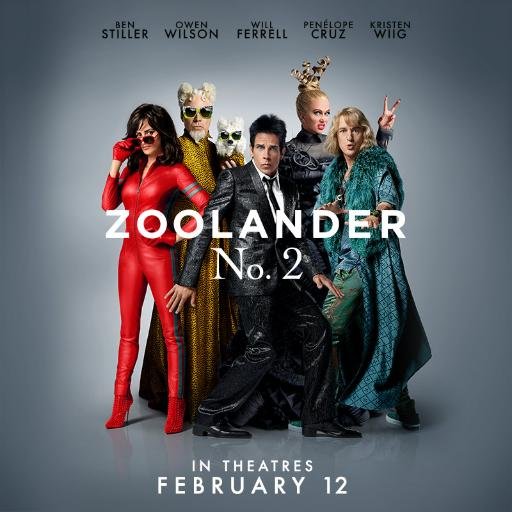 The Zoolander times are over, especially after seeing the newest Ben Stiller film, Zoolander No. 2. If you want to see this movie, I recommend either not seeing it, or waiting until it’s on Netflix. The movie did not excel nor did it meet the expectations in comedy and plot, and the acting was decent at best.

I had the advantage of seeing Zoolander 2 opening day and I was honestly pretty disappointed. In the first 2001 Zoolander film, the plot and jokes were much better. Derek Zoolander (Ben Stiller) and Hansel (Owen Wilson) are professional male models. They dislike each other until later on when Matilda Jeffries (Christine Taylor) finds out that the fashion designer king, Mugatu (Will Ferrell) is trying to kill him and the Malaysian Prime Minister. Eventually, Mugatu plots for Zoolander to kill the Prime Minister with a song. Eventually, Hansel, Jeffries and Zoolander overcome Mugatu and he goes to fashion jail.

The plot of Zoolander 2 was decent. It started off when  Zoolander’s wife (Matilda) died after the ¨Derek Zoolander´s Center For Kids Who Can’t Read Good¨ building falls, killing Matilda. Zoolander is trying to find his son, (Derek, Jr.) But when he gets taken away for Derek being too stupid to take care of a child, Zoolander goes into hiding in the blizzards of ¨Extreme North New Jersey¨, while Hansel goes to the deserts of ¨Uncharted Malibu Territory.¨ Then, after Billy Zane reunites them back to modeling, they head to Rome to try to find Derek Zoolander, Jr.

The movie went downhill from there. I only laughed out loud a few times. The movie tried to put in too many technology jokes and they were not funny. That’s what I think the overall problem of the movie was: they were trying to make it funny but it was not 95 percent of the time. The movie mainly just lacked anything. It was hard to sit through once it started, which does not make a good movie. The jokes seemed too over the top, making it not seem interesting nor good.

When you see the first Zoolander, you remember the Orange Mocha-Frappuccinos, the gas station scene, the walk off, etc. But there really was not any memorable scene in this movie, which was also a bust. How I put it, is that the director had 15 years to make this movie, and yet it seemed like he made it in a day. That was a key reason to why this was a terrible movie.

So overall, I feel this movie was a complete bust and a huge waste of money. I will reiterate again, that the movie lacks in pretty much everything, including comedy (which is what it was intended for), plot, acting and much more, making this film a huge bust, which is why I gave it a one out of five stars.