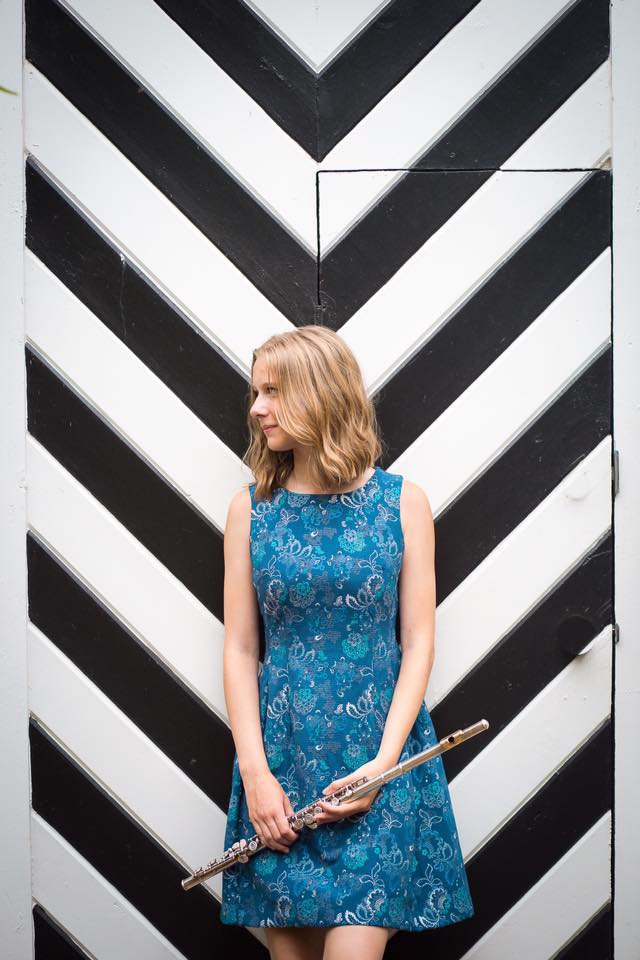 Julia LeKander is a senior at Batavia High School who is very passionate about her music. She currently plays the flute in wind symphony and plays the alto saxophone in marching band. She also tried out for drum major and did not get it but she did not let that drag her down. She continues to thrive and strive with her music.

Interviewer: What activities are you involved in at school?

I: How long have you been in marching band and what made you want to join?

JL: ¨I have spent my time with the band for three years and I wanted to join because a lot of my friends were doing it and I needed to try something new.¨

I: What do you like about marching band right now?

JL: ¨I love to be able to spend lots of time with my friends before I graduate. I also like being able to get better and further my skills at another instrument other than the flute. In the future, I would like to try and play trombone and sitar.¨

I: What is your theme for this year’s show?

JL: The Anatomy of Sound and how sound affects different emotions. We have a six-foot-by-eleven foot ear that is going to be in our show and the color guard flags have ears on them, too. The ears represent how when we listen to different sounds that then create different emotions.

I: How has the band been preparing for competitions?

JL: ¨We have had many 9-5 rehearsals and we have had a lot more influence from other directors other than Mr. Owen and Mr. VanClay.  We started rehearsing three weeks before school started 9-5 Monday through Saturday. Personally, I have flute lessons after school once a week that helps me with my music and I was doing my own workouts during the summer to keep myself in shape.¨

I: Considering you have competed a lot, what is it like at a marching band competition?

JL: ¨Depending on the time the band performs, you will either have to wake up early in the morning and usually spend one or two hours rehearsing the show and music before lunch and you usually eat lunch at the school until the trucks come to leave for the competition. Once you arrive at the school where the competition is you have a physical warm-up and a musical warm-up and after you perform you go and change out of your uniform and sit in the student section to watch the other bands. The competition could have finals or they could just announce winners. If Batavia makes finals, we get changed again and do our show for a second time. Some competitions, you don´t get back to school until really late which is the only downside. ¨

I: Would you consider marching band a sport since you attend competitions?

JL: ¨We don’t have an offense or defense but we do have a National Competition. Therefore, I consider it a sport because we put as much time in effort in as say football players do. We may not work out in the weight room but we do have vigorous workouts before rehearsal.¨

I: I hear marching band has a lot of very talented seniors. Any you could see pursuing music as a career?

JL: ¨Definitely Reed Gordon who plays the tuba. Also Scott Lillig who is the drum and Rob DiCosola who is also a drum major could definitely pursue a career not in marching band but in a form of musical education.¨

I: Do you see yourself pursuing music as a career?

JL: ¨Definitely. I want to go to Lawrence University to study flute performance. With that degree, I hope to perform with a major orchestra and teach flute lessons.¨

I: What are you hopes for this years season?

JL: ¨I hope that we grow even more as a band than the previous years and set a new standard for the Batavia Marching Band. I also want more students to better understand our marching band and have an appreciation for it.¨