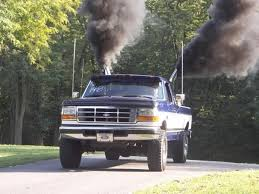 The 6.0 by Ford was a nice attempt in 2003  and they were good running trucks, until they started blowing head gaskets. In the years following, people just started bulletproofing their engines and finding that they didn’t blow a headgasket too often. They are decent at towing but again they have problems with blowing up so do you want to take the risk pulling and getting on the road and having a problem? They can be made reliable through aftermarket parts and bulletproofing.

You think Ford would have gotten the message with the 6.0 to make a more reliable engine and the 6.4 was supposed to be that but as it turns out the 6.4 Powerstroke had more problems with its engine. Not only did it have head gasket problems but it had problems with its turbo and intercooler making the owner have to go out of his or her way to take it back to Ford to get the dealership fix or go with an aftermarket causing the price to shoot up. But for the non-puller it’s  a cool looking truck that pushes a lot of horsepower.

This was the first diesel offered by Ford and one of the most reliable. My personal one from 1984 is still running well today, knock on wood. It’s a  working truck and a great  pulling truck  with no major head gasket problems but from the factory, the truck will run cold due to Ford putting in a thermostat that doesn’t run with the engine so well. But for Ford’s first diesel truck it was a home run for the time it had amazing pulling power.

The 6.7 is the first diesel truck motor completely by Ford before the motors were international. Overall, they did a very fine job on the 6.7 unlike the previous two models being the 6.4 and 6.0 having the head gasket problem. The 6.7 didn’t it was all around a well running  motor its reliable and great work truck it has a very large towing capacity and is offered in a duly style as well.

The 7.3 powerstroke in my opinion “the best and most reliable diesel truck ever to be offered by Ford.The work ability on it is great; they have been used in everything from dump trucks-to tractors. It has a huge amount of pulling power, even  without a tuner. All around it’s a well-made, affordable truck. My uncle’s friend has one that is at 500,000 “miles” and still running strong.