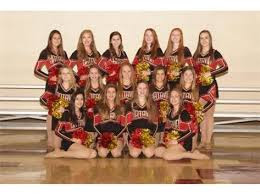 Last season’s highlights:  The team qualified for nationals at the UBA Elite Camp in Iowa. The dance team also made it to state and placed 12 out of 36 teams. They were awarded second place in the Upstate Eight Conference (UEC) competition. Not only did they get a high place in conference, as a team they earned a GPA of 3.67. Of the 28 girls on the team, 17 made Academic All-Conference last season. The dance team raised over $5,000 for Relay For Life Cancer Society.

Top returnees: “Everyone from last year came back and a few freshman joined the team. The top returnee is Courtney Caporali,” Fuqua said. “Courtney has been on the varsity team since she was a freshman and now she’s a senior.”

Top newcomers:  Elyssa Chu is a freshman this year who made the varsity team.

Outlook for this season:  “Our mission statement is one team one mission,” said the dance team Coach Fuqua. This year, the team is the largest it has ever been, with 22 members and one team manager.  “Everyone is very excited for this year’s season. The team catches everything very fast. The Batavia dance team are a good team and they will be starting in November” Coach Fuqua.

Top teams in your league/area: St. Charles North and reigning UEC champions Geneva are the biggest competitors in Batavia’s conference.