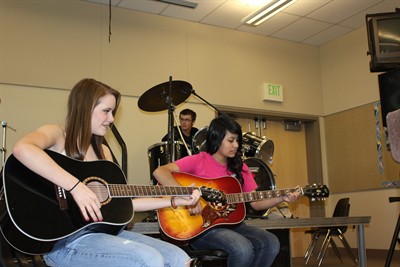 Music for some is a hobby, but to others, it’s a passion that inspires people to never let their creative hearts die out. How do we keep the fire from being extinguished? There are many different ways we can prevent this from happening, but one offer that has not come up is a class that helps these local musicians kickstart a career for their passion, not just by playing music but learning from other musicians, being taught basic music theory, and marketing, among other relevant topics.

Classes like these are lacking in our public school system and it’s really frustrating to see other musicians struggle and hit a dead end because they don’t know what to do. But if unless there are given opportunities, it can further the creative fire within people and inspire them to keep going. For example, Culver High School students in Oregon were given the opportunity to take a class that revolves around this very principle. Teresa Jackson from the portland tribune went on to further explain,

“Some members of the class have been playing instruments most of their lives, and others are just starting out, but they’re all learning to listen to each other, work out their differences, and play good music,” Jackson said.

This is not only an important creative outlet for people who strive and pursue a career in the musical arts, it also establishes the harsh reality of criticism, as well. Criticism should not be viewed as a negative response to someone’s idea, rather it should propel someone further and become a better musician in that sense. This is another major factor that musicians who are starting out on their own would miss if they don’t have the classes necessary to teach them about opinions and how other people critique someone’s art. Katrina Dix from newsadvance.com went on to further recount the benefits of the musical program.

“E.C. Glass High School Rock band was given a chance to record an album thanks to the $600 grant that was given to them by the Lynchburg city schools education foundation for the second year in a row”,” Dix said.

The future of young musicians wouldn’t look much brighter if students had the opportunity to let the kids play the music that they want. If school administrators just gave them the chance to take these classes and learn from teachers and the peers around them, they would have supports in place to be successful. But why should we have another music class when there is orchestra, band, and choir? These are all are very successful extracurriculars, but think of the possibilities if we incorporated a class that combined every music form possible? It would encourage every musically in-tune student a chance to thrive and improve on the art form they are best at. Also, it will give them a chance to play the music at school in which they want to play

Music can inspire young people to do many great things. For some when they make it to the big leagues, it’s a dream come true. But sadly the reality is most people will not make it to the top 100 billboards. This sad reality can be defeated, though, and it can be possible with the help of schools and its students.