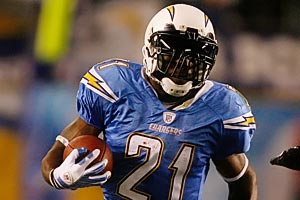 Football is the most physical sport in America. The equipment world has done a fantastic job providing comfort, flash, and most importantly protection.

Lately, though, the National Football League  has been cracking down on the equipment and how it should be worn. I believe the NFL is too cautious on the equipment around the league. This use to be a fun sport to watch and enjoy.  Now there is no much red tape and rules to follow; it takes some of the fun out of it.  Fans as well as players are not enjoying all the logistics of the game of football.

One rule that the NFL has about its equipment is the height of socks. First, nobody cares if  a player’s  socks are higher or lower than the regulation. In college football, some players wear their socks up to their knees and some wear them at their calfs. While, in the NFL the players are required to wear their socks from the bottom of their leg to the mid-calf, according to the NFL rulebook. Indianapolis Colts running back Frank Gore was fined 15,000 dollars for having the socks too low. Many NFL players have socks that go below their mid calfs in a game due to pulling on the legs and running around.

Another, rule that the NFL has about its equipment is that players cannot wear undershirts longer than their jerseys. If any player wears a shirt longer than their jersey throughout the game they will be fined for a significant amount of money. Dallas Cowboys wide receiver Dez Bryant wore a blue colored shirt to match the color of the Cowboys white jersey, and was fined for having it longer than his jersey throughout the game.In 2010 Detroit Lions wide receiver Nate Burelson wore a white undershirt with a team slogan ion the front and was fined 15,000 dollars.  In college football players are allowed to wear a longer shirt then their jersey as long as it is in the color schemes of that team.

Additionally, the NFL has a rule on helmets which is appropriate in the sense of the game and wearing them during the game, but the rule on helmets is not so fair when it comes to playing when a specific visor has to be worn. Players like LaDainian Tomlinson started to ask the NFL to be able to have a dark visor due to health. The National Football League should let any player wear whatever visor they want even if it is not due to health conditions. This protects against the sun and glare and is a personal preference just like wearing sunglasses for bystanders.

In conclusion, the NFL has rules that are great for the safety of the players, but there are rules that are useless in the mind of a fan and as a player. Equipment is a very big part of the game and will continue to be forever but not all equipment has to be monitored to a tee. I believe that the NFL is too controlling with the equipment rules, but I also agree with precautions must be addressed. Like they say “Rules make the world go round, but there comes a point where players and people just want to play football.”