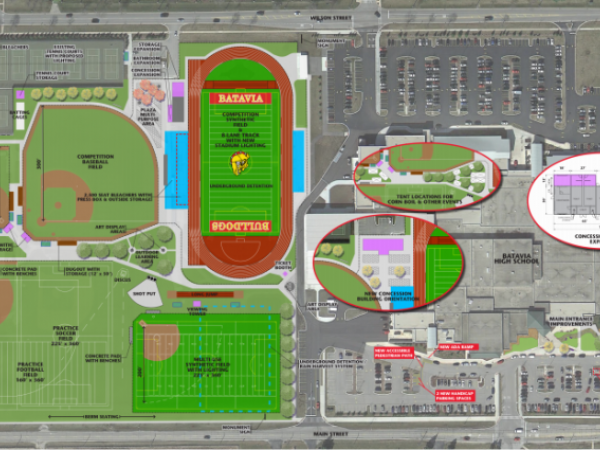 By Daniel Gotfryd and Kyra Swims

At a cost of $1.1 million, Batavia has succeeded in transforming the grass football field to turf. The field was funded by the booster club and the Capital Project Committee. The project started on May 16, 2016 and ended in late August. The new turf will debut on Sept. 17 at the Bulldogs’ homecoming football game against Elgin.

“It’s been in the planning for the past ten years and so far it has been a success,” said athletic director Dave Andrews.

Athletic advisor Dave Andrews confirmed that the new turf was a must-have for Batavia student athletes.

“The athletes deserve it,” Andrews said. “It was a need. Now since we have the turf, all PE classes can use the field along with kids who do spring sports. With the turf, we also put in a new track which cost $400,000. The asphalt is down and ready to get painted.”

Football Coach Matthew Holm said that he enjoyed the old field because it allowed the kids to have some fun in the mud.

“I love watching kids get muddy and tearing up the field,” said Mr. Holm, “It’s what they should be doing. Now with the new installment, it’ll be different. I’ll miss the old field, but I’m beyond excited to see what the new turf has to offer.”

Mr. Holm said the field will have a significant impact on the athletes.

“Before we had this field, the Bulldogs played spectacular, but now that they have this new turf, their confidence and school spirit will be at an all-time high,” Holmes said

When talking to Drew Lillig, soccer player at BHS, and Nick Lucarelli, football player at BHS, they expressed how they felt about the new field and what it had to offer.

“We can actually practice on the field instead of preserving it,” Lillig said.” Last year we practiced inside because we didn’t want to ruin the grass but now that’s all changed.”

“The turf makes everything easier,” Lucarelli said. “I will miss the grass but on the turf, we have a much better grip. Plus if it rains the field won’t be all muddy.”

According to Mr. Andrews, St. Charles schools are considering installing turf. South Elgin and St.Charles East will be the only schools that Batavia will play on actual grass.

“If the Bulldog’s take good care of the new turf” Andrews said, ”we should have plenty of fun for years to come.”

EDITOR’S NOTE: This article was originally published saying that the total costs were $13 million. The story has been corrected.