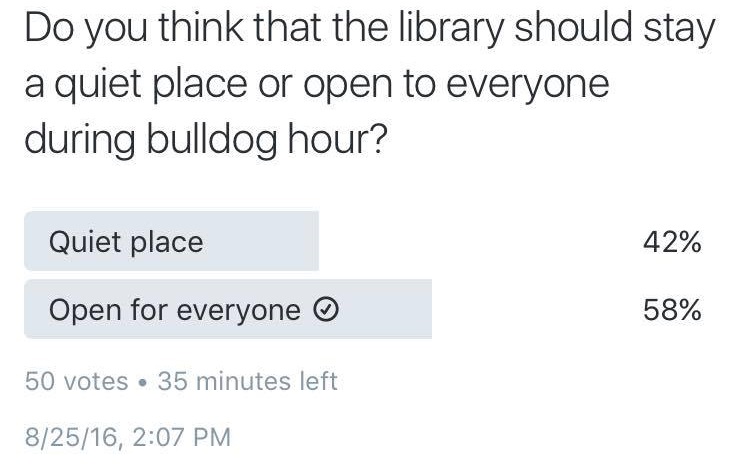 Batavia High School students have been waiting for over a month for Bulldog Hour to return to students’ schedules. BHS has had Bulldog Hour for two years, two different ways and the teachers and school administration are working to find a solution to help solve the problems that Bulldog Hour has faced in the past, but no one knows when Bulldog hour will start again.

“We have a school leadership team that is comprised of teachers, counselors, and administrators that are in charge of changing things around the school to make it a better learning environment,” said Principal Dr. Joanne Smith.

“It was going to be a daily thing but on a rotating schedule,” Holm said, but that proposal was turned down by the majority of the teachers.

A set of people were asked if they liked the school’s past versions of Bulldog Hour. The first version was every Thursday, starting with late start; classes were shortened to 75 minutes each block and it was after second block for an hour. In that hour, students were required to eat and finish their work.

The second Bulldog Hour was every Thursday, still starting with late start, and classes were shortened to around 71 minutes. It was after second block, for 30 minutes, and students were required to sign in and stay in that class the whole time. Passing periods were five minutes, which caused students to arrive to class late.

“I liked the original (Bulldog Hour),” Holm said. “I understand the problem with supervision but I still believe it’s beneficial for most students.”

One hall monitor disagreed with Holm, saying she didn’t enjoy Bulldog Hour because she had to watch the kids that were running around.

“I like the original idea and being able to chose my own teacher to go to,” said senior Ethan Krumwiede.

Cameron Marbach, a senior at BHS, also favors the first Bulldog Hour that the students were given.

Marbach, was also in favor of keeping it the same. They both said that if they had missed a day of school that week, it was easier to make up work that was missed.

Bulldog Hour is an idea that the school leadership team (SLT) observed on school visits two years ago and was meant as a new way of helping students. Dr. Smith said she hopes that the SLT will come up with an idea that will last and will also be beneficial for everyone.