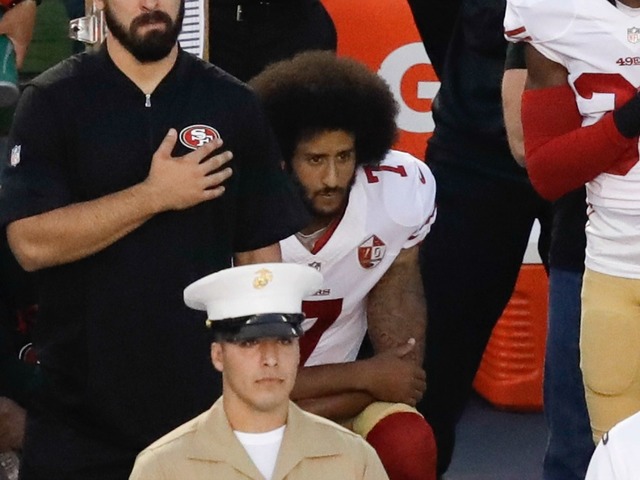 Patriotic? Possibly. In reality, the real question is was it appropriate? In an act of symbolism on August 26, Colin Kaepernick- fading star QB for the 49ers- chose to kneel for the traditional pre-game anthem against the Green Bay Packers, defying what we as Americans have long stood for. This motion immediately drew well-deserved attention and outrage from many fans and reporters on the scene, sparking a debate about the appropriateness of using the anthem as a stage for protest.

While a sign of disrespect such as this during the anthem would raise alarm regardless of the situation, Kaepernick differentiated himself by using this as a platform for further coverage. I believe, like many other Americans who have spoken out, that while Kaepernick should be able to protest for others and show his opinions, the anthem is neither the time nor the place to do so.

Digging further into why Kaepernick did this, many initially thought this to be simply a sign of anti-patriotism towards the United States, but after further questioning, Kaepernick revealed that this action was intended to demonstrate many ideals he holds very close to his heart. Knowing he would face days of media coverage and interviews, Kaepernick chose this preseason game as the platform for him to launch what has become a strong political statement on the state of our modern society in respect to race relations and social injustice, which is a popular issue within our country.

“I am not going to stand up to show pride in a flag for a country that oppresses black people and people of color,” Kaepernick told the NFL Network. “To me, this is bigger than football and it would be selfish on my part to look the other way. There are bodies in the street and people getting paid leave and getting away with murder.”

This response is very valid and well needed in our current nation, but again, the anthem is not the place to demonstrate it. The anthem to me and many other Americans symbolizes the history and valor of our nation throughout history and helps to pay respect to those who came and perished before us to improve it. Roger Goodell, the standing commissioner of the NFL, was hesitant to take a stance on the act but could not help reflecting on the pastime of patriotism in football and the history and tradition that Kaepernick defied.

Others have said that his act of defiance towards the anthem stands as some sort of anti-American protest, which Kaepernick has repeatedly argued against. He is sure to gather further attention, both positive and negative, and will continue to push his ideas and positions. Going into the future, Kaepernick plans to continue making a stand, but we can only hope that he chooses a better time and place to do so.